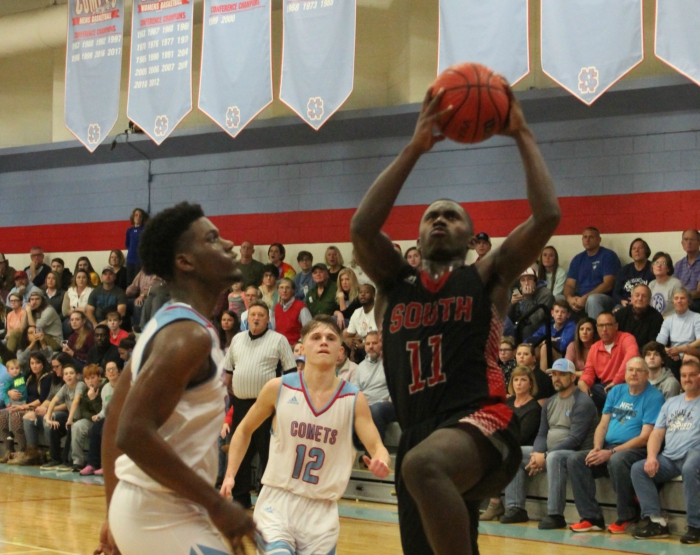 Jaquez Cooke drives the basket for two of his 17 points in the Bulls' win at North Stanly on Friday, 63-62. (Photo by Charles Curcio)

With 5.2 seconds left, North was in-bounding the ball under the Comets’ own defensive basket. Garrett Clark tried to throw long to teammate Nalik Veasley but was intercepted at half court by Tori Colson.

Colson took one dribble and found Cooke open on the right wing; the junior rose up with the hand of North’s Bryson Childress in his face and his high-arcing shot hit nothing but net as time expired.

Cooke’s shot set off a wild celebration as South fans poured onto the court to celebrate with the team.

The Bulls (7-6, 5-1 YVC) played the game without one of the team’s starters, Justin Gaddy, who suffered a hand injury and will likely not return this season.

Cooke led four in double figures for South with 19 points, 15 of which came in the second half. Chandler Lowder, starting for the injured Gaddy, had 17 points for the Bulls and Jacorian Legrand added 14. Addison Tarlton scored all of his 10 for South in the first half.

In the final period, a basket and a three-point play from Clark put North up by six early in the quarter.

South added one free throw after Veasley was whistled for a technical foul for hanging onto the rim following a dunk attempt.

The lead for North reached as high as seven after Lowder’s steal and layup with 5:28 on the clock

South answered with a 7-0 run including a Lowder three, two Legrand free throws and a Cooke bucket which tied the game at 56-all with 3:44 left.

North scored four points in the next minute to regain the lead. Clark scored a basket, then Childress got a quick steal and a layup, giving North a 60-56 lead with 2:21 left.

Childress added a free throw for a five-point advantage with 1:35 left.

Cooke scored seconds later, then made it a one-point game with a back-door cut with 30 seconds left.

South fouled Koby Poole, who hit his first free throw but missed the second. The Bulls looked to take the lead, but Legrand’s three hit the back of the rim and the Bulls knocked the ball out of bounds with 5.2 seconds left.

North could not inbound on its first chance, calling timeout to set up the final play of the game.

South coach Sean Whitley said after the game he told his team in that timeout to face guard everyone except Clark in-bounding the ball.

“He had me going deep and had Jaquez on Bryson,” Colson said. “I saw Bryson cheat a little bit…I faked to Addison and got it to ‘Quez.”

“I was wide open and (Colson) passed it to me,” Cooke said.

Regarding the win, Cooke said: “Chandler had to step up; he made a couple of good plays.”

“We had to force everything deep; anything in front of us we would foul,” Whitley said about the team’s defensive approach in the final seconds.

“(North) threw the ball over the top, which is what we hoped they would do, but then we still have to go make the play. Tori gets it, makes the right pass and ‘Quez makes the shot.

“These guys just battle,” Whitley said about his team. “Chandler comes in and knocks down big shots; Jacorian is a legend that gives everything…this team never feels like they are out of a ball game.”

South Stanly is off until Thursday when the Bulls host West Stanly in a non-conference matchup. South returns to YVC play Friday at home against North Moore.