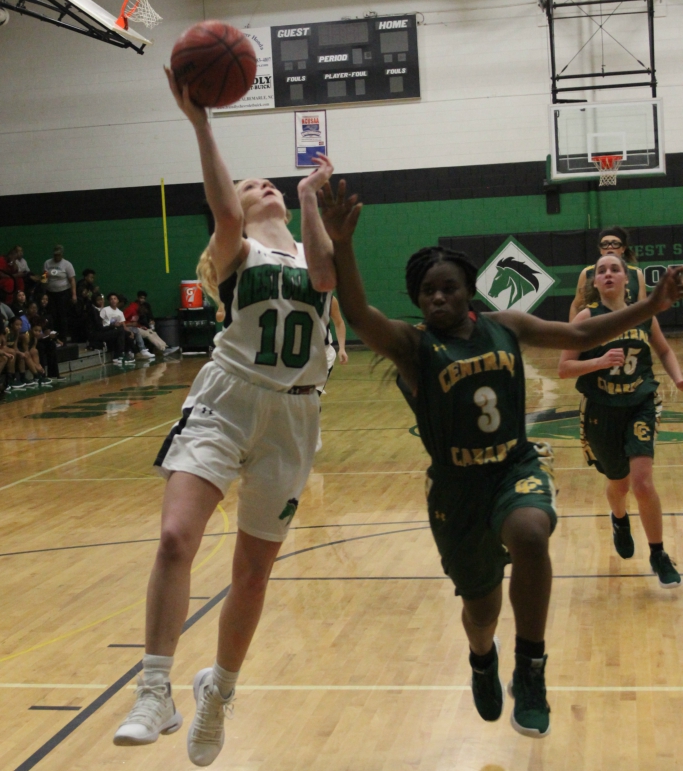 West's Dani Moss goes for a layup in the second half of Saturday's game, guarded by Central Cabarrus guard Jael Miller. (Photo by Charles Curcio)

The West Stanly women’s basketball team lost its third straight and sixth in the past seven games on Saturday in a non-conference home contest with the Central Cabarrus Vikings.

Two Vikings (6-6) reached double figures in the game, including Jael Miller, who finished with 21 points including 7-of-9 at the foul line. Aniyah Tate added 16, including 10 in the second half.

The Vikings opened with an 8-0 run over the first three minutes of the game, but the Colts responded. Carmen Bishop scored back-to-back baskets, then buckets from Furr and Brittany Green tied the game, 8-8, with 2:07 left in the first quarter.

West cut the lead to 11 early in the third with buckets from Maryn Mauldin and Dani Moss, but an 11-0 run over the next four minutes put the lead into the 20-point range.

The Vikings led by as much as 29 in the final period before five late points from Cassidy Scott and Furr got West back within 22.

West hosts Forest Hills on Tuesday and goes to South Stanly for a non-conference game Thursday.