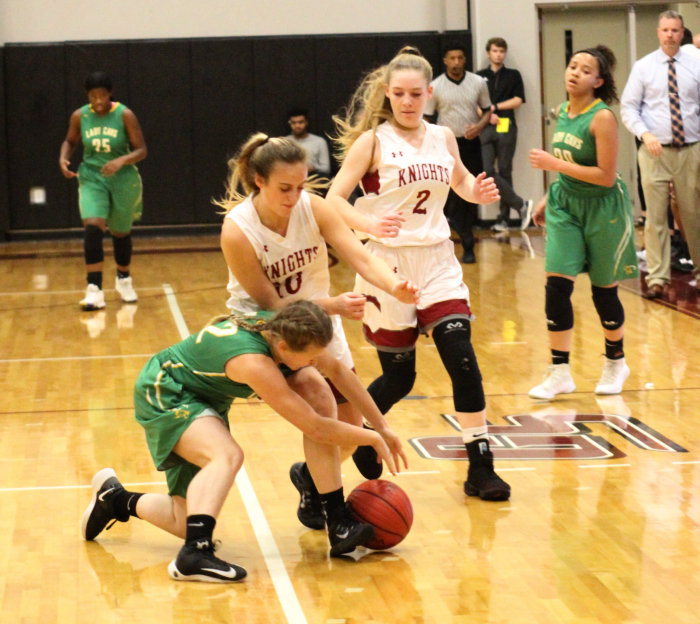 Gray Stone's Lillie Austin (No. 10) and Danielle Werts go after a loose ball in Tuesday's home win for the Knights. (Photo by Charles Curcio)

Taking on a team with only one loss in Yadkin Valley Conference play this season, the Gray Stone women’s basketball team pulled away late for a 43-29 win over North Rowan.

Hannah Freeman was top scorer for the Cavaliers (5-6, 3-2) with 18 points, including all 12 of the visitors’ points in the first quarter.

Gray Stone opened with a 7-2 run over the first 2:25 of the game, including buckets from Danika Ray and Werts and a Lillie Austin trey.

Freeman answered for the Cavaliers with six points in a row to put the visitors up 8-7.

Gray Stone outscored North Rowan 9-4 over the final part of the opening quarter to lead by 17-12 after one quarter.

The Knights opened the lead up to 10 points in the second but free throws helped the Cavs keep the game close. Four foul shots in the final three minutes of the first half, along with a four-minute dry spell offensively for the Knights, allowed North Rowan to pull to 25-19 at halftime.

Gray Stone pulled ahead further in the third as the Cavaliers struggled to score. North Rowan shot 1-of-11 from the field and 2-of-11 from the free-throw line and the Knights outscored the Cavs 11-4 in the period to lead 36-23 after three quarters.

The Knights’ defense continued to limit North Rowan’s offense in the fourth as the visitors were 1-of-14 in the period.

Gray Stone head coach Robert Stack said his team talked about shutting Freeman down in the second half.

“We knew if we could impact her…we tried to keep her off the line. We knew we had to stop her,” he said.

Stack said his team’s height advantage and ability to keep opponents off the offensive glass “is a blessing…we can usually hold teams to one shot per possession and that helps swing the game when things get close.”

The win puts the Knights two games above the .500 mark in conference play and tied for fourth with South Davidson, who lost 66-41 Tuesday night to first-place Albemarle.