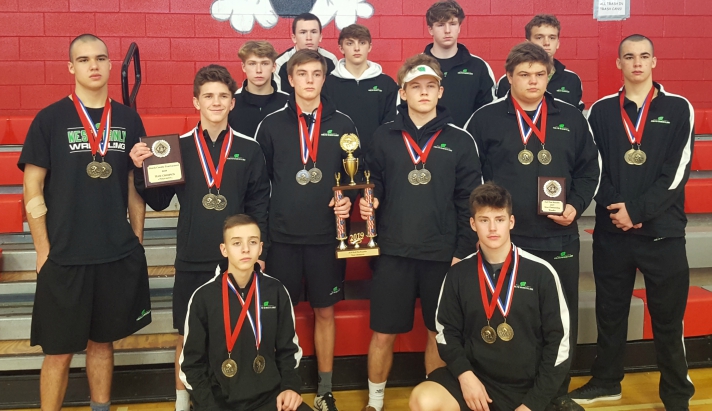 On Saturday, the West Stanly wrestling team won the county championship meet and went 5-0 at the Bullpen Duals hosted by South Stanly.

Eight West Stanly wrestlers were undefeated on the day, earning All-County status as well as winning their respective classes in the overall duals. Grant Honeycutt posted three forfeit wins including a pin of Parkwood’s Diederick Baden and an 11-0 majority decision over South’s Chris Ramirez.

At 132, Korbin McNeill posted a pinfall win over North’s Harlon Hatley and technical falls of 16-0 and 17-1 versus South’s Hunter Barrier and Union Academy’s Issac Williams, respectively. He also had two forfeit wins.

Andrew Becker wrestled at 160 pounds for West and had one pinfall, besting Parkwood’s Isaac Edwards. He also won a 15-2 majority decision versus Lavonte Richardson of South Stanly and a 7-3 decision against Union Academy wrestler Christopher Morgan.

Brandon Becker, competing at 170, had three forfeit wins along with a pinfall over North’s Wes Layton and a 5-4 decision versus South’s Rodney Hammond.

Sam Veazey had pins over North’s Meliek Bryant and Union’s Noah Ashfield, along with three forfeit wins in the 182-pound division.

Griffin won by pin over the Bulldogs’ Hyatt, Parkwood’s Isaac Edwards, Union’s Josiah Hemphill and West’s Dakota Alexander, along with a forfeit win.

Other top performances included Albemarle’s Adrian Little, who was named All-County and the Most Vaulable Wrestler for the county match at 195 pounds. Little pinned West’s Braxton Lipke while earning forfeit wins versus South, Parkwood and Union Academy.

North Stanly had one representative on the All-County squad at 113 pounds in Ricardo Bustos. He pinned South’s Connor Curlee and had a forfeit win over West.

The All-Stanly team did not have a clear winner at 126 pounds as none of the wrestlers posted a 3-0 mark in county matchups.