Joyce Griffith Butler, age 72, of Albemarle, NC, died peacefully on the morning of January 8, 2019 in her home surrounded by her family.
A loving, strong and playful woman, this wife, mother, aunt, grandmother, great-grandmother and friend to many will be greatly missed and remembered with joy. 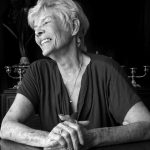 Joyce was born February 12, 1946 in Pittsburgh, Pennsylvania to J. Guy and Elsa Griffith. Her brother, J. Guy Griffith, Jr. preceded her in death.
She attended Winchester Thurston from kindergarten through high school. She then went to Boston University, transferred to Point Park University, from which she received her Bachelor’s Degree.
She returned to school in the 1980s and received her teaching certification from Chatham University. While teaching in North Carolina, she earned her Master’s Degree from Walden University.
A celebrated English teacher for over 30 years, her work garnered multiple awards. She lovingly and joyfully served students at several schools, including Anson County High School, Albemarle High School and Grey Stone Day School. She remained actively involved in Delta Kappa Gamma after she retired.
A lifelong Episcopalian with a deep faith in God, she has been a member of All Saint’s Episcopal Church in Concord, NC for the past 20 years.
She was a frequent lector, a Lay Eucharistic Minister and served with the local chapter of The Daughters of the King.
She was married to Alan W. Bock, who preceded her in death.
She is survived by her second husband, The Rev. Charles Roger Butler, with whom she recently celebrated 37 years of marriage.
Joyce’s other survivors include her children: Thomas Butler, Stephen Butler, Anne Ferguson, Beth Voiles, Justin Bock and Madeleine Bock; her grandchildren: Wes, Emily, Cortney, Geoffrey, Zach, Hunter, Kassidy, Harrison, Jaedon, Ben, John, Griffin and William; and her great-grandchildren: Lily, Kiera, Sophie, Aiden, Jackson, Kaylee, Aubrey and Lydia.
Funeral services will be held on Sunday, January 13, 2019 at 2pm at All Saint’s Episcopal Church in Concord, NC. Family will receive friends at a reception in the parish hall following the service.