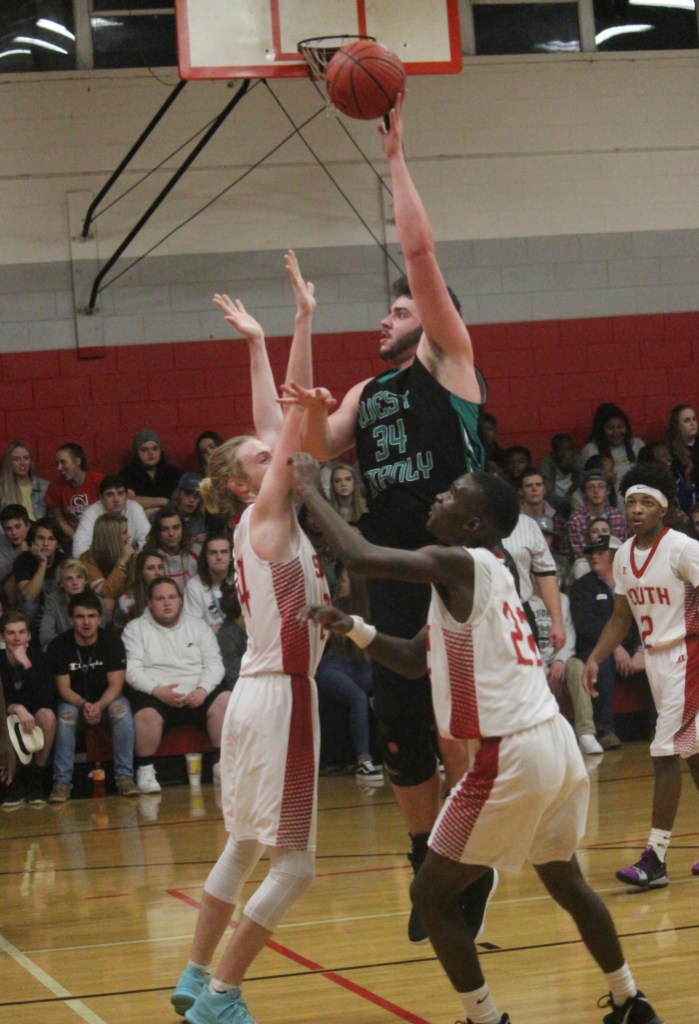 West's Hayden Greene goes for a shot in the lane in Thursday's game. (Photo by Charles Curcio)

Thursday’s non-conference men’s basketball game between visiting West Stanly and host South Stanly came down to the wire. The Colts scored in the final seconds off an offensive rebound to earn a 53-51 win over the Bulls.

Trevor Kelly led the Colts (7-7) with 16 points, including 11 in the second period and the rebound and bucket with seconds left. 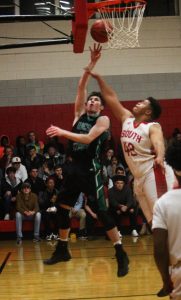 With the game tied at 51 in the final minute, Jordan Manshack set up West’s last possession by getting a steal from Legrand on the defensive end and calling timeout.

The Colts ran the clock down to 15 seconds and found center Hayden Greene in the low post. Greene’s left-handed hook shot missed, but Kelly raced in from the right wing for a two-handed tip-in with 13 seconds left.

“At the beginning of the play, we wanted to run the clock down and give us a chance to if we missed a shot they would not be able to get a shot off,” Kelly said. “I saw the lane was wide open so I was trying to get the cut… Once I was in the air I knew I could put (the ball) back in because I was wide open.”

South did not call a timeout and moved up-court quickly. Cooke fired a three in the final seconds, but it came up short. A jump ball was called on the rebound and the Bulls got the ball back on the alternating arrow with 0.6 seconds left. Addison Tarlton got a long 3-pointer attempt off before the buzzer. It fell short.

West opened the game with a 7-0 run before South outscored the Colts 8-2 over a three-minute span midway through the opening period. Manshack and Greene both scored in the final 1:15 to put West up by 13-8 after the first.

The visitors pushed the lead to double digits midway through the second, leading by as much as 16 in the period. The Colts led the Bulls 32-20 at halftime.

South slowly chipped away at the West lead in the third, getting as close as five in the final 20 seconds. After three quarters, the Colts’ advantage was 45-38.

Six points in a row for South in the first 2:18 of the fourth pulled the hosts within one point, 45-44. The Colts pushed the lead back to five in the final three minutes with a Greene offensive rebound and bucket along with an Austin Medlin free-throw.

Legrand hit three free throws in the final two minutes to pull South within two, 51-49, then Cooke tied the game with an offensive rebound and putback with a minute left, setting up the final minute of the game.

Regarding Kelly, Thompson said: “he’s maturing the last couple games; I’ve been on him pretty good. He makes mistakes but he plays so hard; he’s a talented kid with a chance to be really good.”