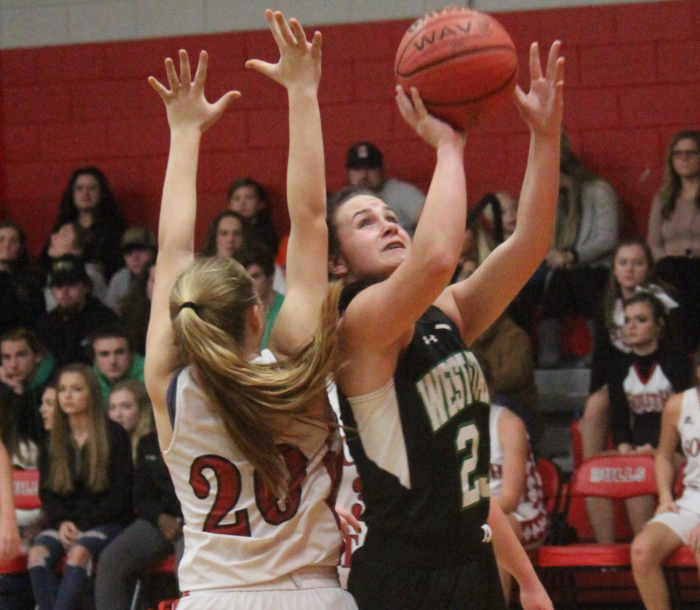 West's Kailey Furr goes for a shot in the lane in Thursday's game. (Photo by Charles Curcio)

Three starters for the Colts (5-10) scored 10 each in the win: Brittany Greene, Kailey Furr and Raelee Furr.

Mattie Hinson was the top scorer in the game, putting in 13 for the Bulls (6-9).

West came out strong offensively in the first period, outscoring South 11-2 over the first 3:27 including five from Greene and four from Raelee Furr. The Bulls answered with 10-0 run over the final four minutes of the opening quarter, trailing the Colts 13-12.

Hinson put the Bulls up early in the second, but West quickly answered with an Addie Barbee three to retake the lead. South fought back to within two midway through the quarter before a 6-0 push over the final 2:19 of the half gave West a 27-19 halftime lead.

West pushed the lead to double digits in the third, outscoring the Bulls by nine to lead 41-26 at the end of the period.

The Bulls outscored the Colts 9-2 over the first four minutes of the final period, getting within seven, 42-35, but South did not score for the rest of the game.

South will host North Moore on Friday in a YVC matchup while West will be at home against Central Academy on Friday for an RRC game.