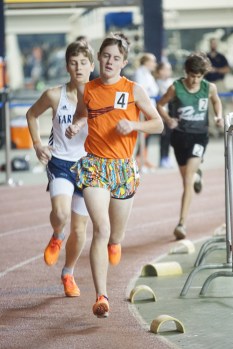 Austin Huneycutt runs in the turn during the KYA meet at East Tennessee State University this past weekend. (Photo contributed by Johnny McManus) 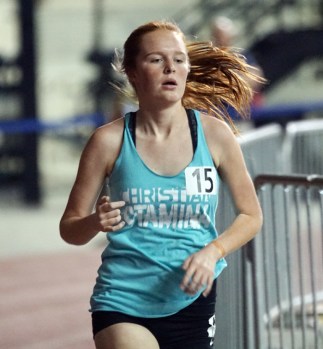 On Friday, 13 runners who attend West Stanly High School and their parents traveled to Johnson City, Tenn. to compete in the KYA Indoor Classic at East Tennessee State University.

High school and college teams across the Southeast have a chance to compete at a high level while the meet also gives athletes an opportunity for college recruitment.

The group entered the distance medley relay on Friday night with two women teams and one team for the men. The relays were distances of 400, 800, 1,200 and 1,600 meters.

The men had Noah Almond lead off with a fast 1,200 of 3:36 to lead Daniel Brattain, Logan Huneycutt and Austin Huneycutt.

Two of the women had a quick turnaround with seniors McManus and Simpson entered in the two-mile race Saturday morning.

McManus ran even mile splits of 6:24 and 6:25 for a 12:49 time and a seventh-place finish. The senior entered against some of top runners from Kentucky, South Carolina, Georgia and Tennessee, missing the medal stand by 1.5 seconds.

Simpson developed a muscle cramp in her side halfway through the race and was slowed from her normal performance.

Up next were the milers with Natalie Almond finishing as the second freshman overall, running a 6:18, with junior Katherine Pollard running 6:33.

The men saw sophomore Austin Huneycutt run 5:33 and junior Daniel Brattain run 5:38, while senior Logan Huneycutt was a little off his normal performance.

Freshman Chayse Huneycutt got his first taste of racing in the mini dome with a personal-record 2:32.