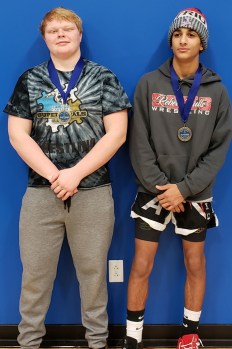 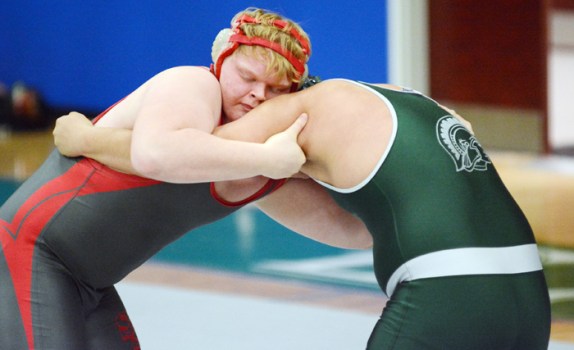 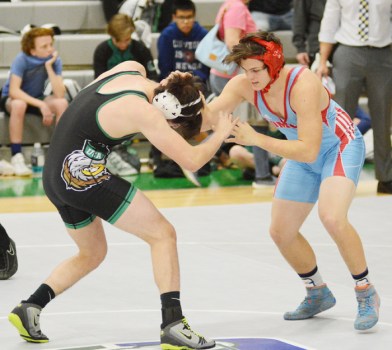 North Stanly's Carter Terry takes on an opponent from Uwharrie Charter at the Pin Down Autism Super Duals. (Photo contributed by Starla Whitley)

The wrestling teams of South Stanly and North Stanly traveled to Uwharrie Charter to compete in the inaugural Pin Down Autism Super Duals Friday and Saturday.

Proceeds from the tournament were donated to the Autism Awareness and Research Foundation. Eagles coach Chris Waddell’s son, Robby, has autism, and was made a special guest of the event.

“He is our ray of sunshine,” Waddell said, adding autism is a special cause for himself and his family. Uwharrie Charter plans to host the event annually to raise funds for autism research.

The Eagles won the tournament team championship, posting an unblemished record in the two-day tournament.

In the head-to-head matchup with the Bulls and Comets, South had pinfall wins by Hunter Barrier at 132 pounds and Khris Mayo at 220 along with Drake’s win and five forfeits. North had two wins by pinfall: Ricardo Bustos (113) and Colby Russell (160). Only one of the matches went the distance, the 126-pound match which saw South’s Jaquavius Caraway post a 10-2 majority decision over Blake Gilbert.

North Stanly also posted a 48-12 win over West Montgomery at the duals. The Comets had pinfall wins by McCowan at 138 and Wes Layton at 170 along with several forfeits.

South Stanly will wrestle at Parkwood this weekend at the Rebel Rouser Duals.