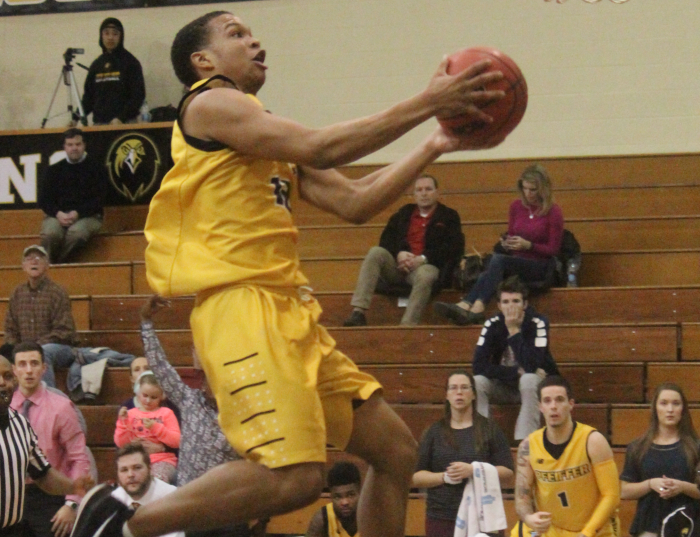 Craig Sabb glides to the hoop for two points in the second half Wednesday. (Photo by Charles Curcio)

Pfeiffer’s Kyle Riddley, who transferred to the Falcons this season from Greensboro, got a measure of revenge on his former team Wednesday night, sinking two free throws with one second left to earn a 114-113 home win over the Pride. 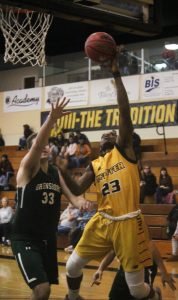 Pfeiffer’s Kyle Ridley fends off the Pride’s Landon Murray on a drive to the lane in the first half of Pfeiffer’s win Wednesday. (Photo by Charles Curcio)

Regarding winning against his old team, Riddley said the win “means everything to me. I’m grateful for the opportunity to come here and play. Winning the game with two free throws, I couldn’t even imagine that.”

Josiah Avington added 18 for Pfeiffer shooting 6-of-12 from the 3-point arc, while starters Tyjarek Simmons and Nolan Whitener added 17 and 12 points, respectively. Off the bench, Craig Sabb had 15, including 9-of-11 on free throws, and Tristen Rodriguez added 11.

Michael Phifer was one five players for Greensboro (2-14, 1-7) in double figures, leading the Pride with 26 points and seven rebounds, shooting 9-of-13 from the field. Carmoni Marks added 24 on 8-of-11 shooting and a perfect 6-for-6 at the foul line.

The Falcons raced out to an early 8-3 lead in the first three minutes of the game on back-to-back threes from Josh Avington, but the Pride rallied by outscoring Pfeiffer 16-4 over the next five minutes. Keyford Langley’s three with 12:32 left in the first half put Greensboro up 22-12.

Pfeiffer retook the lead with a 15-2 run over a three-minute span; back-to-back threes from Avington and a breakaway one-handed dunk from Riddley put the hosts up 27-24 with 9:44 on the clock.

The lead continued to grow for Pfeiffer as Greensboro went over the foul limit. Pfeiffer hit eight free throws in a row over the next six minutes and pushed the score to 48-34 with 4:17 remaining in the first half.

Foul shooting helped the Pride get back within seven in the final three minutes. Greensboro hit 8-of-8 at the line and pulled to within three, 52-49, with 1:09 on the clock. The margin stayed the same by the end of the first half, with the Falcons up 55-52.

Greensboro fought back early in the second half to take the lead on a Phifer bucket with 15:49 left. The two teams fought back and forth until a 9-0 Falcons run ending with two Tristen Rodriguez free throws put the hosts back in the lead.

Pfeiffer looked to have the game sewn up minutes later as a 13-0 run put the Falcons up 95-80 with 8:59 left, but Greensboro would again make a run. Trailing 100-87 with seven minutes left, the Pride scored eight over the next minute, forcing a Falcons timeout. Greensboro then took a brief lead, 103-102, on a Phifer bucket with 4:32 on the clock.

Three times in the final minutes Greensboro tied the game only to see Pfeiffer go back ahead. Avington’s three from the corner with 1:38 left gave the Falcons a 110-107 lead.

Marks missed a three with 35 seconds left and Simmons got the rebound for the Falcons. He was fouled and hit the second of two foul shots for a four-point Pfeiffer lead. 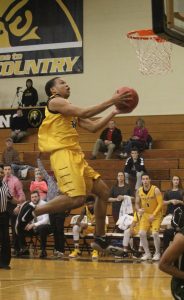 Craig Sabb glides to the hoop for two points in the second half Wednesday. (Photo by Charles Curcio)

On the next possession, Simmons was hit in the eye and went down as Greyson Collins hit a three to pull the Pride within one, 111-110, with 22.7 seconds left. The game stopped for a few moments while trainers attended to him, but he walked off under his own power.

Forced to foul, Greensboro sent Sabb to the line, who hit one free throw. Trailing by two, Marks drove to the basket and kicked to Eric Peaks Jr. in the left corner who drained a three with 5.3 left to put Greensboro up 113-112.

Riddley got the inbound pass and drove the length of the court, drawing the fifth foul on Marks. Riddley went to the line with one second left and sank both free throws.

“When they hit the three and we went into the timeout, Coach (Schoch) made eye contact with me and I said, ‘I want the ball.’ He told me I was going to get it,” Riddley said.

“We work on free throws every day so when I got to the line I knew I was going to make both of them,” he added.

Greensboro’s half-court heave at the end was offline, giving the Falcons the win.

“It’s all a bit of a blur to be honest…it came down to could we get a couple of stops,” Pfeiffer coach Pete Schoch said. “We have had a few situations like that…I hope I’m seeing real growth. The stops were the difference between winning and losing.”

“We can score; our problem, which has been well documented, is defense. Luckily, we have whom I believe is the best player in the conference and we were able to get him the ball,” Schoch added about Riddley on drawing the foul in the final seconds.

The win for Pfeiffer is the Falcons’ third in the last four games. Pfeiffer continues USA South play Saturday on the road taking on the top team in Pfeiffer’s Division, Eastern Division-leading N.C. Wesleyan (14-2, 7-1).