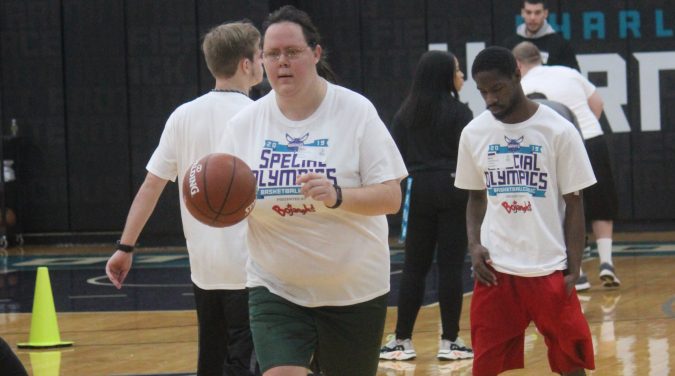 Kellie Hearne dribbles down court during a drill at Wednesday's skill clinic with the Charlotte Hornets. (Photo by Charles Curcio)

Nine Stanly County Special Olympic athletes got the opportunity Wednesday afternoon to improve their skills and learn from the pros at the Charlotte Hornets’ annual basketball clinic at the Hornets’ practice facility inside Spectrum Center in uptown Charlotte.

Athletes from Stanly joined other Special Olympics participants from around the area to show their basketball skills for members of the Hornets and staff. The Hornets have hosted a clinic such as Wednesday’s event for 15 years.

Tracy Yow, the mother of Colby, one of Stanly’s athletes, said the clinic “makes (the athletes) feel important, something which does not always happen. They don’t always get included in anything as a team.”

She said her son and the others love basketball and the opportunity to learn more from the pros, including Kemba Walker, Michael Kidd-Gilchrist, Matt Caroll, Frank Kaminsky, Cody Zeller and others.

Kellie Hearne has been with Stanly Special Olympics for 10 years and has been chosen as a global messenger for the organization. She will be play in the 2019 NBA Cares Unified Game on Feb. 15 as a part of the NBA’s All-Star Weekend in Charlotte.

She said the Hornets have asked her team to come every year and “it’s automatic that I do it” when local director Kathy Odell asks her to attend.

Kellie Hearne goes for the layup during Wednesday’s Special Olympics clinic with the Charlotte Hornets. (Photo by Charles Curcio)

Hearne said she likes to see her teammates “experience growth in their ability” while seeing others compete and improve their skills in the game of basketball.

The athletes were treated to lunch from Bojangles before the clinic then took to the practice court. After warming up, athletes tested and honed their skills at passing, dribbling, shooting and defense.

Many volunteers and staff members spent time with the Special Olympics athletes at the clinic, including Dave Stagdill, who works in the customer service representative department for the Hornets. He also is the manager of the team’s youth literacy program, the Book Bus.

Volunteering at his first clinic, Stagdill said he was happy to see the players excited to see the members of the Hornets’ roster take the court and be able to interact with them.

The enjoyment of the time on the court went both ways though, he said, adding the Charlotte players “were having as much fun” as the athletes. He also said “the chance to learn skills from the pros is cool” while the Hornets’ players “were able to give back to basketball.”