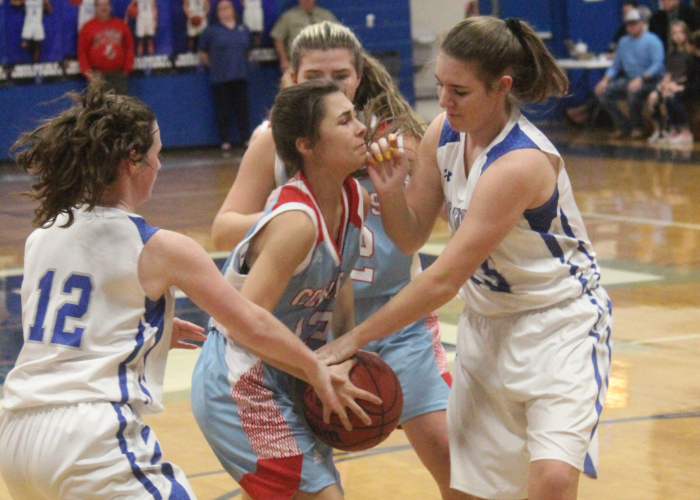 North's Payton Landis fights through traffic in the lane in the first half of Friday's game at South Davidson. (Photo by Charles Curcio)

In Friday’s conference road game at South Davidson, the North Stanly women’s basketball team led in the second half before the Wildcats rallied for a 60-50 win.

Peyton Landis was one of three starters for the Comets (2-9, 1-7 YVC) to reach double figures with 20 points, including 4-of-6 from the free-throw line. Camille Shelton added 16, including 6-of-8 on foul shots, and Lexi Goode scored 12 for North.

Mallory Gardner, who was honored after the game for surpassing 1,000 career points earlier this season, led South Davidson (7-8, 5-3) with 18. Bayli Medlin added 13 for the Wildcats.

North led 6-4 midway through the opening quarter before South Davidson went on a 9-2 run to lead 13-8 with 3:14 left in the period. The Comets stayed within one possession before a Gardner three-point play with 5.6 seconds left put the hosts up 20-14. 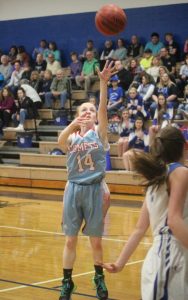 Taylor Burleson goes for a layup in the Comets’ road game Friday. (Photo by Charles Curcio)

The Wildcats went cold in the second quarter, shooting 2-of-10 in the period. A Landis bucket with 52 seconds left in the period put the Comets up 24-23.  Gardner answered in the final 12 seconds to give South Davidson a 25-24 lead at halftime

In the third, the Comets went on a 8-3 push over the first 3:25 to build the team’s biggest lead of the game, 32-28, but the Wildcats started to connect from the outside. Over the final four minutes, North went scoreless while South Davidson scored 13 to lead 41-32 after three quarters.

North got as close as seven with 2:15 left in the game when Gardner picked up a technical foul, her fifth of the game. The Wildcats hit 9-of-11 free throws in the final two minutes en route to the win.

“We played about as well as we could play for about three quarters. We went to the box-and-one and it slowed (Gardner) down,” North coach Greg Speight said. “In the second half, they started hitting the outside shot; we couldn’t guard everything…we missed some shots in the second half we didn’t in the first.”

The Comets play on the road Wednesday at A.L Brown (0-15) in Kannapolis then return to Pfeiffer University on Friday to take on first place Albemarle (15-1, 8-0).