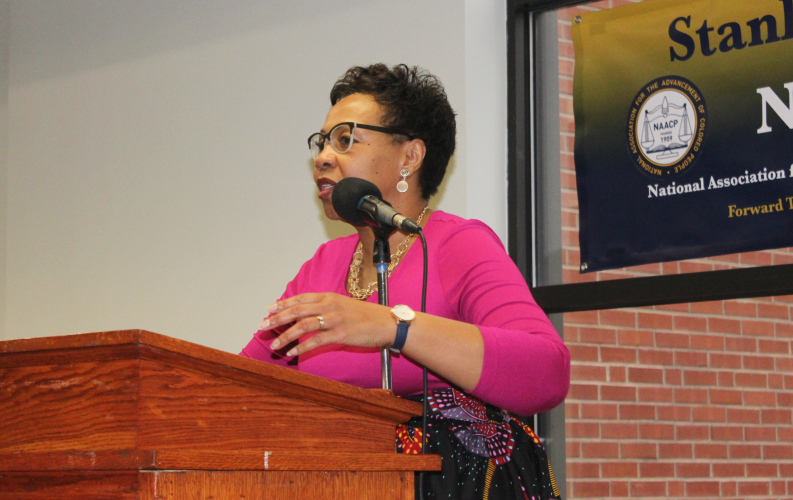 Dr. Martin Luther King Jr. is a man remembered for giving people hope and for providing a vision of how the country could be.

As women throughout the country marched for equality Saturday, community leaders gathered for the 18th annual Martin Luther King Jr. Unity Prayer Breakfast at the E.E. Waddell Center in Albemarle to recall how King influenced them. They also spoke of continuing his mission for unity.

Albemarle Assistant City Manager Nyki Hardy spoke of a work trip in Memphis in 2016. She and coworker were walking in the main art district when they ended up across from Room 306 at the Lorraine Hotel. The site, where King was assassinated April 4, 1968, is now part of the National Civil Rights Museum.

“To say I was taken aback was an understatement; I was humbled, but I was angry and sad…that place lured you in because it honored an American hero,” Hardy said.

She said she processed all the emotions of being in that place, while her coworker, who was 13 years older than her, lived through the tragedy.

Hardy said King “transformed a nation” around one truth — that all are created equal.

“When we transform the right way with everybody in mind, Stanly County will be a place that lures people because of that beauty, just like the way the Lorraine Hotel had lured me in because it transformed,” Hardy said.

She said King in his “I Have a Dream” speech gave others hope of realizing his dream of equality.

“He left us something to reach for and go after,” Owens-Scott said.

Owens-Scott broke down two words as part of her remarks: hope and unity.

Hope, she said, means “to desire with expectation of obtaining or fulfilling; to expect with confidence.”

She chose a different definition of unity, saying it is in part “a combination or ordering of parts in a literary or artistic production that constitutes a whole or promotes a total, undivided effect.”

She said many people’s hearts are sick because the reality is people have tried to better themselves but still battle inequality, adding “life is not a crystal stair.”

That inequality, she noted, comes in a society where “all men are created equal,” according to the U.S. Constitution.

“How do I live the dream? When do I get to see the goodness of the Lord in the land of the living? Who is going to stop judging me long enough to help me? You tell me to never lose hope…so how does unity win?” she asked those in attendance.

“We are all characters and actors on life’s temporary stage…this thing here called life is temporary,” she added. “Our life story is being written and told about us once we are gone. The question becomes, what do you want people to say about you once you are gone?”

She said people should embrace their differences, look past each other’s color and uniting what they have in common.

One day, Owens-Scott said, people should all “confidently expect to be treated fairly” and “stop dwelling on the past; say bye-bye to the past. The past is just that: past. It means it’s over and done with.”

The breakfast was sponsored by the Stanly County Chapter of the NAACP. New chapter president Tym Scott said the vision for the NAACP ‘is not to sit behind four walls,” but to increase membership and become an organization which is “transparent, be in the street, the highways and byways.”

Scott said anyone can become a member of the NAACP “regardless of race, creed, or even the color of your skin, sexual orientation or age.”

“It’s not just for black people, it says colored people,” Scott added. “The last time I looked in the dictionary or in a crayon box it had every color.”