Michael Scott “Pop” Poplin, 48, of Locust, passed away Friday, January 18, 2019.
Scott was born February 25, 1970 in Charlotte to the late Donald Poplin and Barbara Morgan. He was also preceded in death by his step-father, Hal “Buck” Morgan.
Scott was a devoted husband and loving son. He retired on December 22, 2017 from Charlotte Fire Department after 25 years of service as an engineer with Station 23. 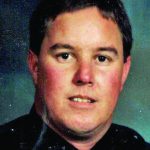 Being an avid sports fan, Scott was devoted to his Duke Blue Devils and Carolina Panthers, as well as being a huge NASCAR fan. When not watching sports on TV, he enjoyed golfing and spending time on the lake.
According to his fire station family, Scott was a great mentor, because he was very knowledgeable about his career and stayed true to the old-school traditions. Scott was the most loyal, dependable man with a big, tender heart.
Survivors include beloved wife of 12 years, Pat Poplin; mother, Barbara Morgan; brother, Donny Poplin; sister, Cathy Poplin; step-sister, Kathy Phillips; step-brother, Bucky Morgan; step-brother, Billy Morgan; nephew, Michael Bartlett; niece Allison Bartlett; and beloved dog, Mimi.
There will a memorial gathering at a later date.
Hartsell Funeral Home of Midland is serving the Poplin family.
Online condolences may be made at www.hartsellfh.com