Billy Wayne Drye, 81, of Stanfield passed away Tuesday January 22, 2019 at Stanly Manor in Albemarle.
A memorial service will be held on Saturday, January 26, at 2 p.m. at First Baptist Church of Stanfield with Rev. Bruce League officiating. The family will receive friends from 12-2 prior to the service in the church. 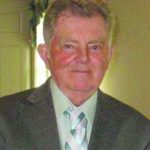 Born July 28, 1937 in Stanly County, he was the son of the late Charlie Spurgeon Drye and Esther Springer Drye.
Billy worked as a machinist until he retired and began his passion for farming and gardening. He was a lifelong member of First Baptist Church of Stanfield. Billy loved being outdoors and spending time with his family.
He is survived by his wife Jean Almond Drye, sons Devin Drye (Cheryl) of Greensboro, NC and Todd Drye of Stanfield, daughter Gina Efird of Stanfield, brothers, Leonard Drye and Benny Drye, sisters, Lillie Tucker, Peggy Huneycutt, and Dianne Furr. Also surviving are grandchildren, Eric Drye (Shannon), Chad Drye, Courtney Araujo (Angel) and Haley Efird, and great-grandchildren, Madeline, Rachel, and Susanna Drye.
In lieu of flowers, memorials may be made to the Alzheimer’s Association at www.alz.org
Stanly Funeral & Cremation Care of Locust is serving the Drye family.