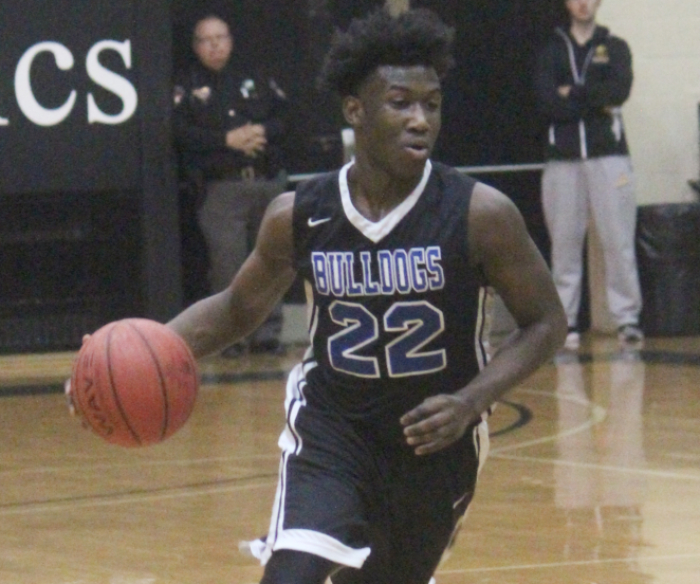 Albemarle's Cameron Williams scored 27 points to lead the Bulldogs to a 72-66 win over North Stanly. (Photo by Charles Curcio)

At Pfeiffer University Friday night, the Albemarle men’s basketball team earned a 72-66 win over North Stanly, sweeping the regular-season series with the Comets while keeping pace in the Yadkin Valley Conference standings. 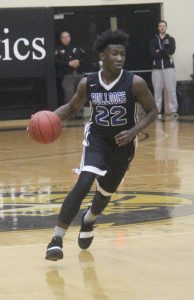 “We wanted to come out and be assertive from the beginning; we knew if we won this game we would be tied for second in the conference. It was a must-win for us,” Williams said.

Bryson Childress led the Comets (9-7, 6-3) with 31 points including 16 in the second quarter, hitting 11-of-14 at the free-throw line. The senior was limited to two points in the first quarter.

“He’s a good player and we had to focus on him,” Williams said about shutting down Childress early.

The Comets struggled to score in the first period as Albemarle built the lead. Childress missed four 3-pointers and the Bulldogs took the lead with an 11-0 run.

Albemarle had one goal-tending call on North overturned, then Williams added two free throws to lead 16-7 with 1:15 on the clock. The Comets got within five on buckets from Cooper Hogan and Childress, but a Currie trey in the final 12 seconds propelled the Bulldogs to a 19-11 lead.

Childress’ offense came alive in the second to pull the Comets back into the lead. Albemarle led by as much as seven points. but an 8-0 North run put the Comets up by one on a Childress three with 2:37 left in the half.

Albemarle answered with an 8-0 run, getting back to back threes from Raye. Lowder’s 3-pointer with 35.8 seconds left in the half pulled the Comets within six, 38-32.

The Bulldogs opened the third with back-to-back threes from Williams and Currie, then got a one-handed jam from Nhazer Little but he was called for a technical foul for taunting. The free throws from Childress put North within seven, 46-39, with 4:24 left in the period.

Later in the third, North got as close as 48-44, but a Williams bucket and two Christian free throws put Albemarle back up by eight at the end of the period, 52-44.

Albemarle’s lead swelled to 13 on back-to-back threes from Raye early in the period. North answered with a 10-2 run to get as close as 61-56 on a Dyson Bell bucket at the 4:20 mark.

But the Comets were not done. Childress got North within six with a three, then the Comets started putting the Bulldogs on the line. On two straight possessions, Albemarle missed the front end of a one-and-one and the Comets cleared the rebound. Childress hit 3-of-4 free throws to make it 67-64 with 46.7 seconds left.

Childress missed a shot just inside the 3-point arc and Albemarle cleared the miss. Williams went to the line and hit both free throws to put Albemarle up 69-64 en route to the win.

“The key thing with Bryson is, I know he’s going to give his team 25 every game…I’m cool with that, but we just couldn’t let the other guys get off,” Albemarle coach Marc Raye said. He added Williams, Raye and Currie “were dynamic” in the game.

Coach Raye added the sweep of the season series “means we are working hard…we have a lot we have to do within a week.”

The Bulldogs have three games this week, starting with a home game Tuesday against North Moore. Albemarle travels to South Stanly Thursday and goes to West Montgomery Friday.

“We’ve had an up-and-down season but we’re peaking at the right time,” Williams said.