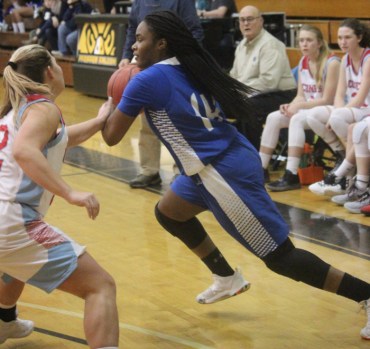 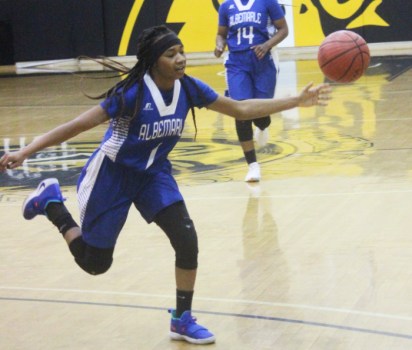 Armani Baldwin gathers in a loose ball in the first quarter of Friday's win over North Stanly. (Photo by Charles Curcio)

The Albemarle women’s basketball shrugged off a slow offensive start with an explosive fourth quarter Friday at Pfeiffer University to improve to 17-1 overall and 10-0 in conference with a 60-50 win over North Stanly.

Shada Wall led three in double figures for the Bulldogs with 16 points including six in the fourth. Ten of Armani Baldwin’s 15 also came in the final period along with Zycoria Tillman, who scored 13 in the game, six in the fourth.

Tillman led the Bulldogs with 10 rebounds and Baldwin led Albemarle with eight steals.

Albemarle’s offense clicked early in the game with an 8-0 run over the first 2:36. The Bulldogs scored four points the rest of the period as North got as close as two and trailed 12-9 at the end.

The third quarter saw the Bulldogs struggle to hit shots from the field, missing 10 in a row until Newton’s 3-pointer in the final minute. The Comets led by as much as five before Newton’s trey cut the North lead to 36-34. Two Landis free throws seconds later put North up 38-34 after after three quarters.

The low-scoring affair continued in the fourth, but the tide shifted to the Bulldogs. A full-court press forced North into a turnover leading to a Wall layup and a 41-40 Albemarle lead.

North rallied with a free throw and a turnaround bucket in the lane from Shelton, then Albemarle retook the lead seconds later. Tillman knocked down a three and then a Baldwin layup put Albemarle up 46-43 with 3:36 on the clock.

The Comets got as close as three with 2:18 left on a Goode layup, but a 7-3 run pushed Albemarle’s lead out to 55-46. North did not get closer than seven points in the final minute.

“We have been so good offensively all year, when the calls go against them, it gets us out of rhythm,” Albemarle coach Eric Davis said.

“The first three quarters, we played very sloppy. We were out of rhythm throwing all over and we did not rebound like we normally do.”

Davis also complemented Goode’s game along with the Comets’ Camille Shelton’s efforts on the boards.

”The pace was theirs; they were at their pace. We could not get into our rotation,” Davis said.

Albemarle has three games this week. The Bulldogs host North Moore on Tuesday, travel to South Stanly Thursday and will be at West Montgomery Friday.