Harold was born in Winston-Salem, NC on May 31, 1934, the first of four children of Julian Harold McKeithen and Millicent Ward McKeithen.
He spent his childhood and youth in Winston-Salem and then attended Davidson College, graduating in 1956 with a major in History. 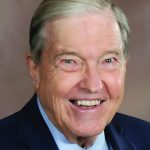 During the summers of his college years he worked as a busboy and bellhop at Lake Lodge in Yellowstone National Park earning just enough money to support his off-duty pursuits fly fishing in the rivers of Yellowstone and mountain climbing in the Tetons.
It was there that he met Charlene Seth, to whom he was married in 1958 while attending Union Theological Seminary in Richmond, VA where he was preparing to be a Presbyterian Minister.
After two years in Cambridge, MA, Harold’s career took him and his family to Morgantown, WV; Phenix City, AL; Metairie, LA; Albemarle, NC; Newport News, VA; and, finally, to Williamsburg, VA where he served Williamsburg Presbyterian Church as Covenant Pastor for Congregational Care from 2003.
At the time of his death Harold had served 57 years in the Presbyterian ministry.
Harold was a dedicated and beloved pastor to every congregation he served. He often expressed how fulfilling his work was and how blessed he was to be able to continue his work in the ministry for so many years.
He was active in the Mecklenburg Presbytery (Charlotte, NC) and the Presbytery of Eastern Virginia and was recognized within those organizations for his ongoing commitment to peacemaking initiatives.
Beyond his work, Harold’s main avocation through the years was fishing – fly fishing in the rivers of Yellowstone Park, fresh water fishing in lakes and ponds in North Carolina and Alabama, and salt water fishing in the Gulf of Mexico, the Atlantic Ocean and the Chesapeake Bay.
Through the years, Harold and his family enjoyed vacationing in Oak Island, NC, including 23 years shared with family and friends in a beach house of his own design.
He found it a great locale for clamming and crabbing as well as for fishing. However, the waters of the James and York Rivers and the Chesapeake Bay ultimately proved a more productive locale for each of those interests.
In addition to his love of the water and its bounty, he and Charlene shared a passion for travel and made many trips abroad in the 1980’s and 90’s, including an especially memorable trip to the Antarctic Peninsula.
Harold died on January 27, 2019 at his home, surrounded by family and caring aides from Bayada Home Health and Riverside Health System Hospice Care. He is survived by his children, Melissa McKeithen of Rowayton, CT, Dan McKeithen (Polly) of Dallas, TX and Lucy Harris of North Creek, NY; seven grandchildren and three great grandchildren; his brothers, Ward McKeithen of Charlotte, NC, Loy McKeithen of Charlotte, NC, and his sister, Millicent Johns of Los Angeles, CA.
There will be a Memorial Service at Williamsburg Presbyterian Church at 2:00 p.m. on February 6, 2019 with Pastor John Morgan presiding.
In lieu of flowers the family request memorial donations be made to the Endowment Fund of Williamsburg Presbyterian Church, 215 Richmond Road, Williamsburg, VA 23185 or online at tinyurl.com/MyWPCGiving or through the church’s website, mywpc.org.