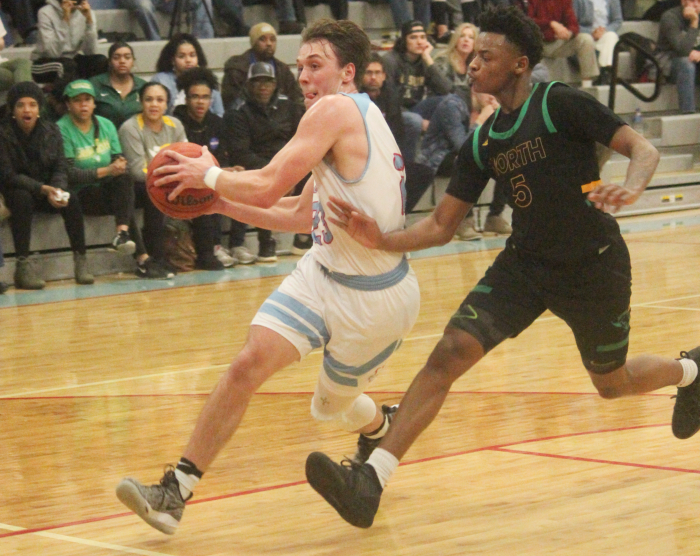 North Stanly’s opponent on Wednesday night, the North Rowan Cavaliers, entered the men’s basketball game having only lost twice all season. One of those losses came to the Comets in a non-conference game at the Sam Moir Holiday Classic.

The visiting Cavaliers avenged the earlier loss in the season as Derrick Page knocked down two free throws with seconds left to spell defeat for North Stanly, 44-43.

With recruiters in the stands from several colleges, the game came down to a player, Page, which North Rowan head coach Jason Causby said does not always get the headlines.

“He has been phenomenal for us all year long. He’s the one that makes us go; he’s an unsung guy, not a big stat guy, but he makes us go,” Causby said.

Bryson Childress moved closer to the all-time Stanly scoring record, knocking down 20 points for the Comets (9-8, 6-4 YVC). The senior guard, who is being recruited by a number of Div. I and II schools, has 1,851 career points, 25 points behind the county’s unofficial leader, former South standout Jacob Noble (1,876 points).

Trailing in the final eight seconds, Childress again had the ball in his hands but was double-teamed, forcing him to pass to Cooper Hogan in the corner. Hogan drove the end line and passed to Dyson Bell, who had just checked into the game after North lost starting center Nalik Veasley to his fifth foul seconds earlier. Bell was unable to hang on to the ball and North Rowan got the turnover as the clock expired.

The Cavaliers erased a 13-point halftime lead and pulled into a 37 tie early in the fourth on a Brevin Goodlett bucket. Carson Lowder broke the tie seconds later with a 3-pointer for the Comets. Childress later added a free throw with with just under 90 seconds left, but Page answered seconds later for North Rowan. His three from the corner put North Rowan up 42-41.

The Cavs had a chance to add to the lead but missed both free throws with 50.1 seconds left after the Comets fouled intentionally. North Rowan crashed the boards with four players, but the Comets’ Lowder came up with the rebound. He dribbled the length of the court then caught Dayjuwon Cooke in a 2-on-1 advantage. Lowder faked towards teammate Koby Poole, then went to the basket uncontested for the layup, putting the hosts up 43-42.

A wild sequence went the Cavs’ way on North Rowan’s next possession. Page missed a 15-foot shot and Veasley grabbed the rebound. When he tried to outlet a pass, Page deflected the pass high into the air into the arms of teammate Quintous Smith, who fired to Page in the low block. Page drew the fifth foul on Veasley on a shot attempt with 12.3 seconds left. He made both free throws.

North Rowan extended its win streak to nine games with the win and improved to 16-2 overall and 11-0 in the YVC despite the Cavs being limited to a season-low 44 points by the Comets.

Causby said the Cavs’ poise in the final minute was “a byproduct of having seniors; what happened is we had some seniors step up and make plays.”

North Stanly coach Paul Childress said the Comets “put ourselves in a position to win; that’s what we just talked about. We try to take the positives from every game, but then the downside is we have to find a way to finish plays…the last possession was no more valuable than the one at the end of the half or end of the first quarter. We have to have effort on every loose ball; one possession and you win the game.”

For North Stanly, the loss was the third in a row. The Comets travel to Uwharrie Charter Friday.