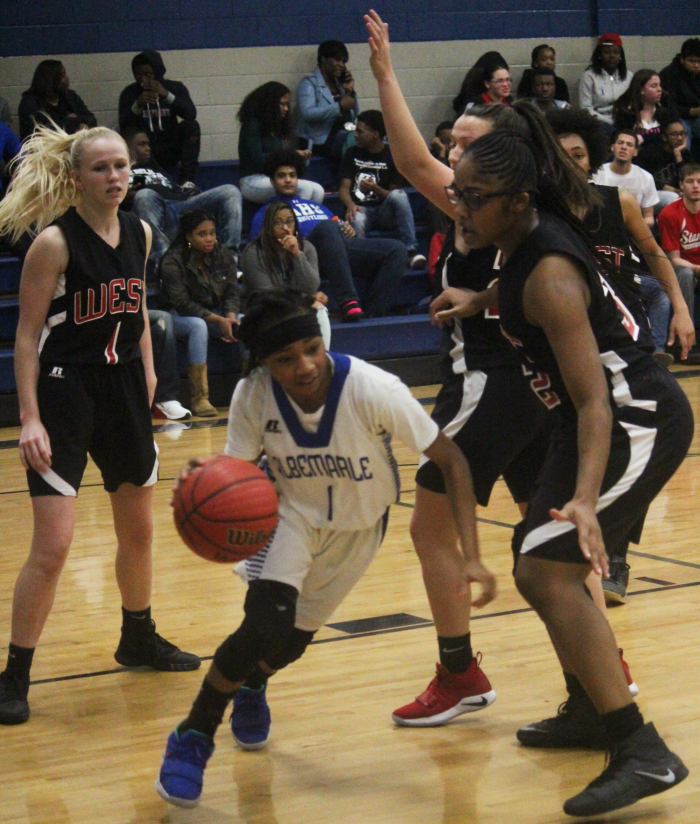 Armani Baldwin looks for room down in the paint during Friday's home win over West Montgomery. (Photo by Charles Curcio)

The season rolled along Friday night for the Albemarle women’s basketball team, but the challenges continued even facing winless West Montgomery. Down to eight players available, the Bulldogs went on an early first-quarter run and did not trail the rest of the game, earning an 58-19 win over the Warriors.

Ranked No. 8 in the MaxPreps polls in the 1A, the Bulldogs were led by Armani Baldwin with 28 points, while Zycoria Tillman added 13.

Albemarle was down to eight players due to illness as well as one player had suffered concussions in practice and is still in concussion protocol.

Most every night, the Bulldogs are the smallest team on the court in terms of average height. The tallest players, Tillman and Trinity Ayers, are both listed at 5-foot, 6-inches tall.

What is not small about Albemarle is the team’s efforts on defense. The Bulldogs created turnovers in the game including 24 steals, slightly above the team’s average of 19.2 heading into the game.

Albemarle coach Eric Davis said he and his coaching staff had a three-year plan when players like Baldwin and Tillman were freshmen.

“We knew this group was special. As freshmen and sophomores, we played (bigger schools). Every summer we went out and played 4A schools. They have seen everything; this team every day comes to work,” Davis said.

During off-season workouts, Davis said he routinely got 10 to 12 players each time.

“That work has paid off…it’s just a great group of kids.”

“We work hard on defense; in the half court we are very good as long as they stay disciplined…everything they have gotten they can earn,” the coach said.

Baldwin stands just 5-foot 2, but her high-arcing teardrop shots and have helped her average 13.9 points per game this season.

“We try to do our best to box out on rebound and play good defense,” Baldwin said about the team’s approach to each game.

The senior guard added she has worked a lot on her offensive game.

The win for Albemarle was the team’s 10th in a row and put the Bulldogs over the 20-win mark for the second straight season. The team’s overall mark ranks among the best win percentages for an Albemarle women’s basketball team in recent memory.

Friday’s result also narrowed the number needed to earn the YVC regular-season title to two. Finishing first in the conference combined with the team’s overall mark and ranking on MaxPreps determines which side of the bracket the Bulldogs will play in as well as how many home games the team could potentially have in the first four rounds.

Albemarle could claim the YVC title Tuesday when the Bulldogs host second-place Gray Stone (13-4, 8-2). The Knights were off Friday night.

“It means a lot; we are a very small team…we try to do our best and put in effort,” Baldwin said about the team’s success.

Davis said his team is capable of making a deep run in the playoffs, but it depends on how “disciplined they stay, that they keep working hard and being humble.”