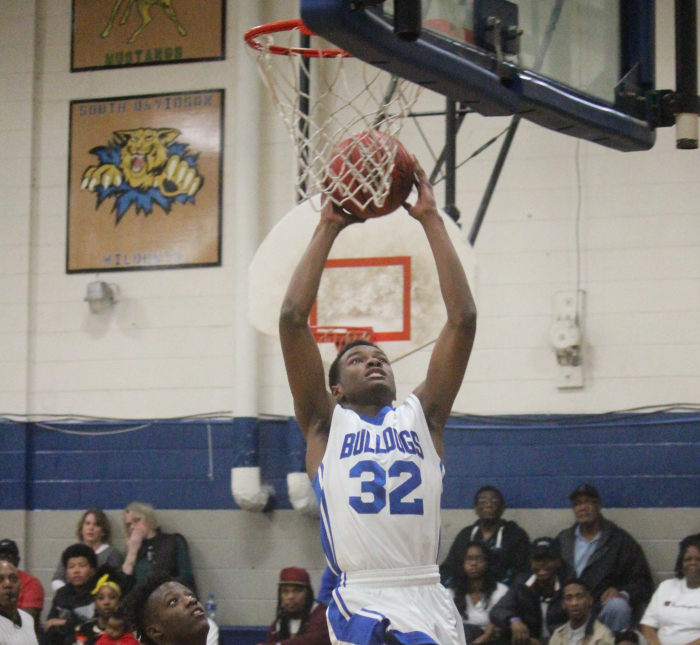 Albemarle's Nhazer Little goes to the basket for two of his 17 points in Friday's win. (Photo by Charles Curcio)

Perseverance is a word which can be defined in part as “persistence in doing something despite difficulty or delay in achieving success.”

Such could be said for the example of Nhazer Little as well as his Bulldogs teammates. After falling in to third place in the Yadkin Valley Conference with a loss to South Stanly Thursday, Albemarle bounced back with a 59-47 home win over West Montgomery Friday.

Little’s story has been one of finding inspiration in basketball and school and overcoming adversity. He said he was going through a bit of a depression with his father in jail and his grades in school were not good.

“The team supported me; Coach Raye helped me out every day. I couldn’t practice unless I had done my homework. I got it done,” Little said.

“I was wondering if (my father) would come to see me tonight,” Little said before the game.

His father was in attendance for the game, which Little said made him want to play better in the game.

“I had a bad game (Thursday); I knew I had to come out and execute. Coach Raye told me even if I didn’t show up, he had my back…I took my feelings and put them on the court,” Little added. “I knew when I got out there it was just myself and the other players on the court. I couldn’t focus on anything else; I had to do what I had to do.”

Raye said he can tell when some parents are not in the lives of his players, but he does not ask about it, he is just there for them.

“On the court, I’m their coach and their dad,” Raye said. “We all have basketball in common; it’s the bait. It’s what makes us bite. The thing is for us to find common ground and believe in each other…a lot of these kids just need a positive conversation.

Raye said Little “has accepted the challenge academically and athletically. I told him, one day that ball is going to stop bouncing, what are you going to bounce to then?”

The coach added Little comes to mandatory study hall after school every day.

Nhazer “has a greater quest now,” Raye said, adding “that’s the thing I love about him. He has all his brothers here in the locker room. I’m glad this locker room is small; we can express our feelings to each other and still know I’m your brother regardless of what you say.”

Raye said he didn’t want credit for Little’s turnaround, but that any credit “comes from him making that change.”

Ali Currie took a charge with just over two minutes left and appeared to hit the back of his head on the floor as another player landed on him. Currie was prone on the floor as athletic trainers and members of law enforcement immediately came to his aid. He stood up after several minutes, receiving ovations from all across Albemarle’s gym.

The other moment came with less than nine seconds remaining. Brandon Christian went up for a rebound and came back down on the foot of another player. He appeared to suffer an injury to his left foot and could put no weight on it as he was helped off the court.

The Bulldogs starters stayed on the bench for a long portion of the first and second periods because of coach Raye’s dissatisfaction with their performance. Albemarle’s starters eventually came back in with around six minutes left in the first half and promptly got the lead back.

“We started out ugly; we had the mindset that we could win and not have to play. You can’t want anything and not put forth the effort,” Raye said.

From that point on, Albemarle never trailed for the majority of the game, pushing the lead to double digits late.

Albemarle’s season continues Tuesday at home against Gray Stone, possibly without Currie or Christian available to play. Raye said, however, it’s “who got next? I told the guys tonight, when your number is called, accept the opportunity.”