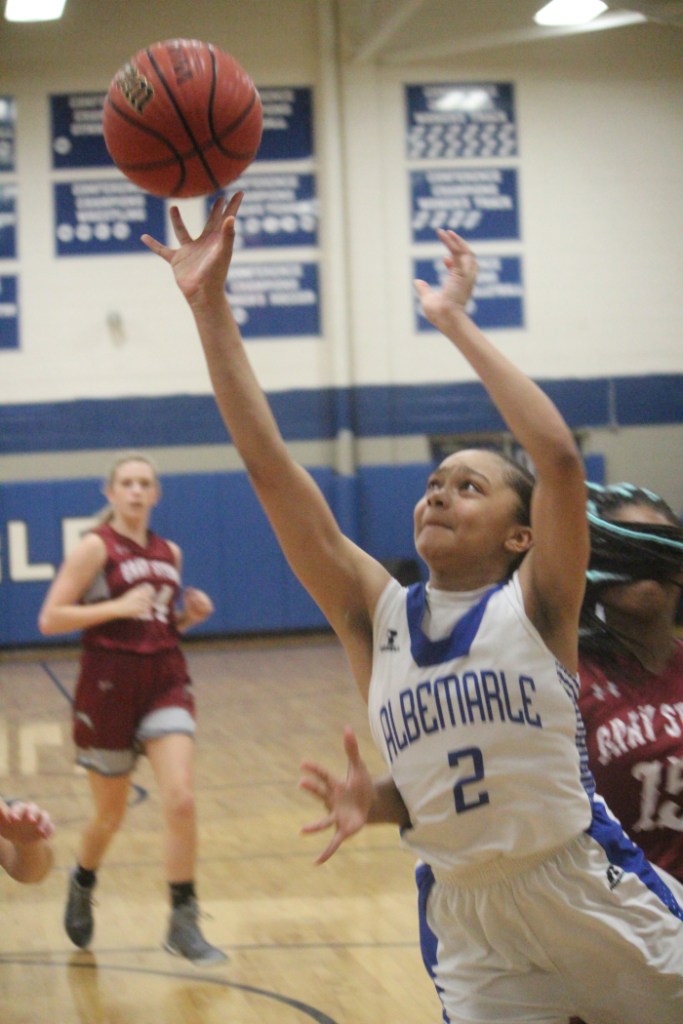 Albemarle's Kiana Ridley glides to the basket for a layup attempt in the first quarter of the Bulldogs' home win Tuesday over Gray Stone. (Photo by Charles Curcio)

A late rally in the fourth quarter of Tuesday’s 64-55 win propelled the Albemarle women’s basketball team to its first regular-season conference title since the 2013-14 season.

“(Winning the title) means a lot because it’s been our goal. We’ve been working very hard in practice,” Tillman said about the team’s efforts.

She said the team’s motivation all season has also come from head coach Eric Davis, especially like most nights like Tuesday when the Bulldogs are at a disadvantage in terms of height.

“We know we’re small so we have to be aggressive,” Tillman said.

One drill in particular helps those efforts, Tillman added. Every day in practice the Bulldogs work for 20 minutes on boxing out to get rebounds against teams, especially those with larger players.

“We know we are small so we have to box out,” Tillman said.

Albemarle’s pressure defense and rebounding ability have been stalwarts of the team all season. Through the first 18 games, the team averaged 35.6 rebounds per game and forced 19.6 steals per contest. Tuesday night, Albemarle had 45 rebounds including 19 on the offensive glass while getting 20 steals and two blocked shots.

The Bulldogs opened an early lead, but a 23-point second quarter for Gray Stone pulled the visitors within two at halftime. The Knights led with 5:50 left in the fourth on two Wertz free throws, but threes from Kadajah Little and Baldwin put the Bulldogs up for good.

“(Winning) feels good because we have always lost to (Gray Stone). It feels good to beat them two times,” Tillman said about the win.

Davis said Gray Stone “is a good team, well-coached. We knew ever single time we play it’s going to be a battle, be physical, be a fight for 32 minutes.”

The Albemarle coach said his team has been performing in clutch situations all season like Baldwin and Little did in the fourth.

“Last year (the Bulldogs) had some immaturity, but this year they have matured. They fight in the fullest sense of the word ‘Bulldog,’ ” Davis said. “(The girls) don’t quit no matter what size they are.”

Davis said the team “had certain goals and they are hitting every one of them. Every game, they have impressed me a little bit more in their ability to dig down and fight through adversity.”

Albemarle was still without three players due to injury and illness, including 3-point specialist Tameya Newton. The Bulldogs have two games left in the regular season starting with a road trip Friday to South Davidson. Albemarle wraps up the regular season with a home game Feb. 15 versus South Stanly.

Gray Stone plays five games in the final two weeks of the season. The Knights host South Davidson on Wednesday and go to North Rowan Friday.