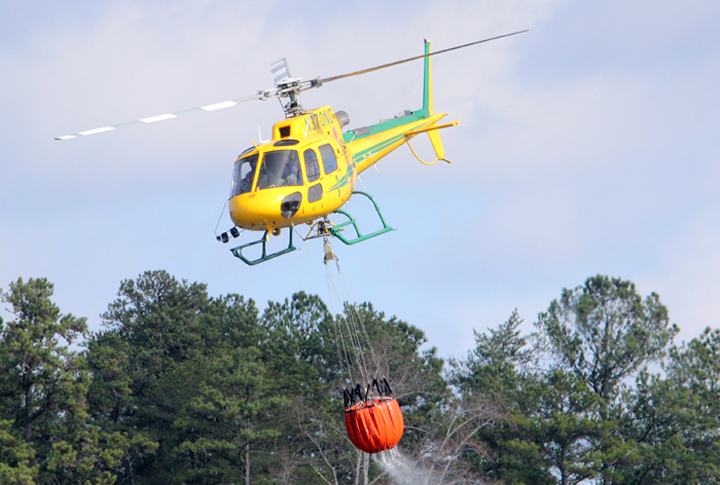 An A-Star helicopter flies across Badin Lake to pick up water for a drop during Thursday's training at Camp Barnhardt. (Photo by Charles Curcio)

Firefighters from across the Piedmont gathered at Camp Barnhardt this week for wildfire training from the North Carolina Forest Service.

Part of the training included scenarios in which personnel dealt with a small controlled brush fire, being graded on how staff is used to help control the flames. Personnel also dealt with a hypothetical situation of a fire just across the lake from the camp next to Harper Hearne Road with one firefighter serving as the incident commander. Simulated radio traffic helped to train personnel in the proper procedures of how to coordinate ground and air resources during an emergency situation.

An A-Star helicopter from Sanford, flown by chopper pilot Dave Spooner, landed in the wide field close to the camp’s rappelling tower. Spooner gave a brief presentation on the various aspects of the chopper’s safety features and capabilities.

The helicopter has an attachment called a Bambi Bucket, which the pilots gently lowered into the water while hovering just above the surface.

Along with the chopper, Air Tractor 802 water bombers, which are based in Kinston, were used to make drops of water onto the property. Both types of aircraft can be used to drop water and fire retardant onto wildfires.

Brian Haines, public information officer for the Forest Service, said the training intentionally provides the firefighters with “a lot of problems, a lot of inputs, in which case they have to work through all those inputs and all those sort of impediments to getting the job done. But they have to figure out these solutions to that. And by doing that, we’re really building up the pressure for them.

“If these things were to actually occur, if they’re on a real fire, (the training) allows them to be able to think critically quickly to get the job done,” Haines added.

Wildfire fighting, Haines said, is different than structural firefighting, despite also being just as dangerous.

“When you’re fighting a wildfire, it’s not always about putting water on the fire,” Haines said. “A lot of times, it’s really about just building fire lines and dealing with things on a very large scale. (With a) house fire, it’s usually a house or a building, so that’s one very contained area.”

Wildfire are seldom in contained areas; rather, many of them can stretch for a number of acres and even miles, Haines said. He added the challenge of dealing with wildfires includes “trying to figure out how you’re going to deal with that. How do you scout out a fire like that and how do you work through all those logistics?”

In addition to firefighting personnel, representatives from the Stanly County Board of Commissioners and Stanly County Emergency Services observed the training sessions on Thursday. Board chairman Matthew Swain, along with commissioners Lane Furr and Zach Almond, were in attendance.

Swain said it was “great to have the N.C. Forest Service choose Stanly County for its training exercises. The catering services they used and several using local hotels all benefited the local economy. It also shows the hospitality of our local air national guard for providing lodging to those in this week’s training program.”

“Their prescribed burning programs while sometimes seen as a nuisance to some help protect millions of dollars in private property,” Swain said. “Having regional and state officials choose Stanly is a reflection of the great work our local foresters do. Not only that but the connections they build with both public and private landowners help make functions like this week’s training possible.”