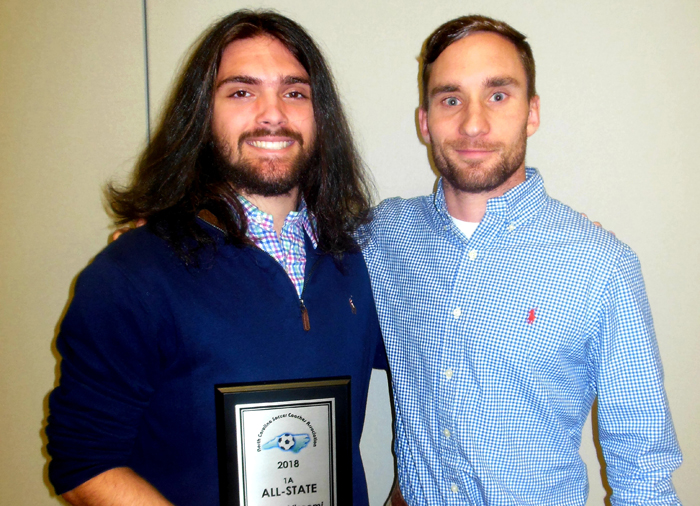 The multi-sport standout and Albemarle native has played basketball and baseball for the Knights for several seasons, but it will be his efforts on the various soccer pitches where people may most recall his name.

Viscomi has received his plaque from the North Carolina Soccer Coaches Association for being named to the 1A All-State team.

Viscomi set two school records for Gray Stone soccer as a striker this season, scoring 42 goals and finishing with 102 career goals, both records. His efforts broke the previous record of 35, which he had tied the season before.

He said the accomplishments feel good but added he “wouldn’t have been able to do it without my teammates and coach past two years.”

Viscomi said Gray Stone coach Bradley Harrington, himself a former standout player for the Knights, coached him for the past two seasons, adding “were it not for him, our team wouldn’t be as it is.”

Harrington also coached Viscomi in middle school, where the senior said the coach “has always been there for me. He understands the game better then anyone else. He has connections with the players and fosters a love for the game.”

With five seniors on the team this year, Viscomi said, Harrington would ask his veteran players what they thought the team should do in various situations, with the players and coach having a mutual respect for one another.

“He would ask us if we wanted to try something new. He could really depend on us if asking for advice with a situation,” Viscomi said.

This season, the Knights finished 16-8-1 and 11-3 in the Yadkin Valley Conference, reaching the fourth round of the state playoffs. The team building started when Harrington and the team went to two travel tournaments: the Battle at the Beach and the Kickoff Classic in Cary.

“It was a lot of bonding time; we connected as a team,” Viscomi said.

Scoring 46 times in a season does not happen without good teammates, the Gray Stone senior explained, crediting players like David Almond and Luke Hill as “unsung heroes” for their hard work in the midfield.

Viscomi said he was glad to end his high school career on a good note, saying he “had to go the extra mile” and “leave everything out on the field every game” in order to set the records.

As far as the team’s legacy goes, Viscomi said he wants to see a Knights team beat his individual marks as well as other team accomplishments. Last year, Gray Stone reached the third round of the state playoff for the first time, then surpassed that this year.

Viscomi said he would miss “practicing every day with teammates pushing each other trying to get better. It’s a grind; you can’t just go out there and (play).”