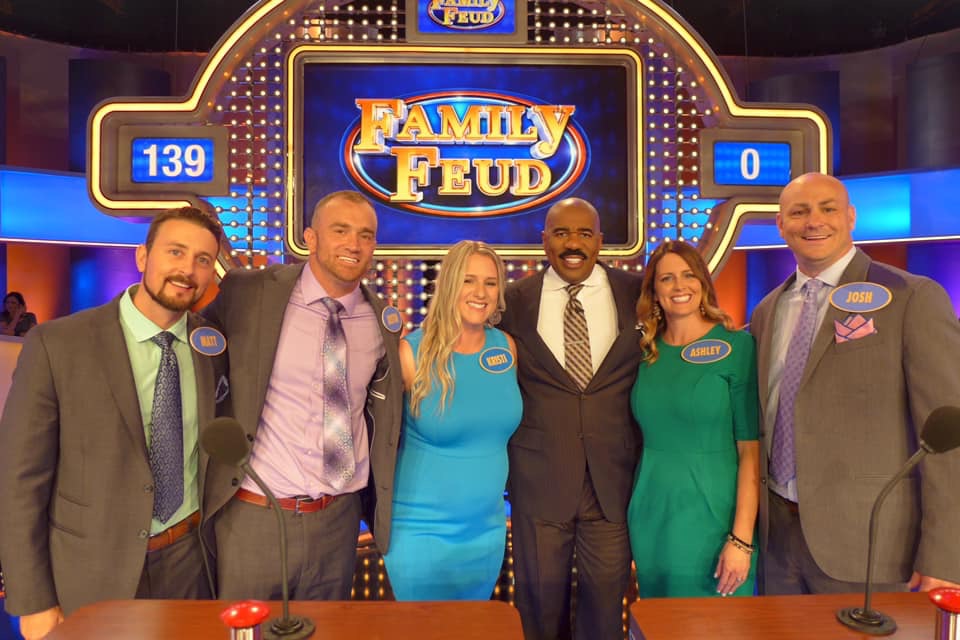 Name something Ashley Eudy would do again “in a heartbeat.”

She taps the buzzer and answers, “Play ‘Family Feud.’ ”

Eudy, 38, and her family taped an episode of “Family Feud” in June. It airs at either 9 p.m. or 9:30 p.m. Tuesday on TV64. She does not know which time, and she can’t discuss whether her family won until after the show airs.

Eudy, who lives just outside Locust, did talk about the great time she, her husband, Josh, in-laws Justin and Kristi Eudy of Stanfield and brother, Matt Gladden, of Mint Hill had on the long-running game show.

“They rolled out the red carpet for us,” Ashley Eudy said. “They were very, very kind. Everybody made sure we were taken care of.”

She said the audience is smaller than one may think.

“It wasn’t that intimidating other than being in front of Steve Harvey, who was very funny,” Eudy said.

She said Harvey would talk to the audience and joke with the contestants during breaks.
Matt, 35, agreed with his sister, saying meeting Harvey was one of the best parts.

“I don’t know where the guy gets it, but he’s full of energy,” he said. “He entertains the entire time. He does stand-up and talks to the audience, he really makes you feel home while you’re there.”

This was unlike shows where the hosts do not interact off camera, Eudy said.
Eudy knows from previous game show experience, since she was a contestant on “Wheel of Fortune” a few years ago.

“That’s a hard game to play,” she said. “It’s easy to play sitting on your couch. Not so much when you’re in front of Pat Sajak and Vanna White.

“I did not win. I brought home a little bit of cash,” she added. “I’m not really actually good at puzzles. That was a lot more nerve wracking because I was up there by myself.”

For anyone thinking of auditioning for a game show, Eudy says: “It there’s an audition, go for it.”

“Everybody says, ‘I’d love to be on a game show.’ Well go do it,” she said. “They just need entertainment on television. You don’t have to be good at the game.