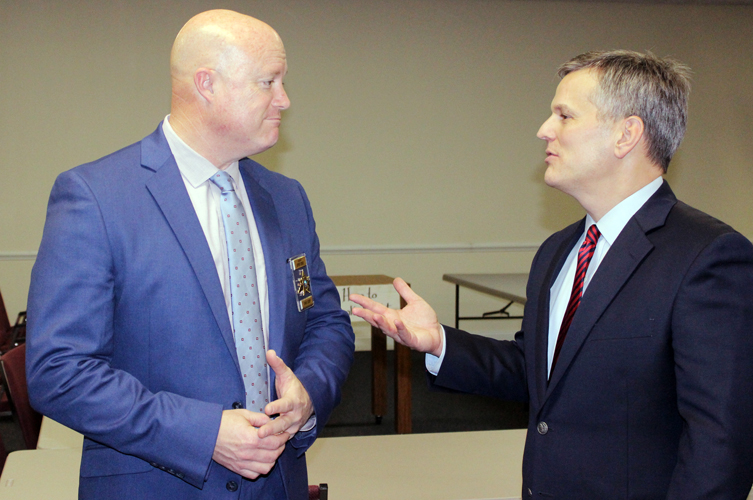 Stein spoke to the Albemarle Rotary Club, then went across the street to Stanly Commons to meet with representatives from law enforcement agencies as well as District Attorney Lynn Clodfelter and members of his office.

One of Stein’s first efforts, he said, was to inventory the number of untested sexual assault kits, which he said statewide numbers at around 15,000. Stein believes that is more untested kits than any other state in the country.

In order to process that many kits, Stein said $9 million will be needed in funding for it, of which he and his office have raised $3 million through grants, including $2 million from the Governor’s Crime Commission and $1 million from the United States Department of Justice. He also has made an appropriations request to the state legislature for an additional $6 million.

He has proposed a tracking system for sexual assault kits so police departments and prosecutors will be able to know their location.

“You can know where your pizza is… law enforcement, the criminal justice system and the victim deserve to know where the kit is,” Stein said.

The testing of kits falls under the Survivor Act, a bill he and members of the legislature have proposed. The proposed act would require law enforcement to submit kits to the state crime lab within 45 days of each kit’s collection. Funding for the act would include hiring additional forensic scientists for the state lab.

“That increased transparency, I believe, will increase accountability on the entire system,” Stein said.

He noted of the approximately 800 kits the state has tested, 87 came back with a hit in the state’s DNA system. Stein cited the example of a case in Fayetteville where an arrest was made in a 31-year-old rape case because of the kits being tested.

“This brings closure and justice for the victim. You get a criminal behind bars…many rapists are serial rapists. And if we can get (them) behind bars, we’re going to protect people and prevent them from ever becoming a victim.”

Stein said the issue he has spent the most energy on the past few years has been the state’s opioid epidemic.

He used the example of a star baseball pitcher who got a college scholarship but tore his rotator cuff. He became addicted to opioids, moved on to heroin and died of an overdose.

Stein said only 20 percent of people who take opioids for 10 days or more become addicted, meaning the majority of those who misuse and fall into opioid addiction do not get those pills from their doctor.

“They get them for families and friends who take it out on this account. So we got to get these pills out of our medicine cabinets,” Stein said.

Another man Stein mentioned was addicted to opioids at 18 and by 21 was homeless, living in a Wal-Mart parking lot. However, that young man got into a rehab program and has turned his life around; he is getting a degree from East Carolina University and is committed to helping other young people avoid the dangers of opioids.

“We really want to make sure that we have people who never touched these drugs in the first place,” Stein said, adding his office has been working on a strategy with three focuses: prevention, treatment and recovery as well as enforcement.

Included in prevention, Stein said, is the practice of overprescribing opioids, which he called “the primary driver of this crisis.” As a country, he noted, the United States takes 10 times more opioids per capita than Japan and five times more than countries in Europe.

An upcoming statewide campaign will look to inform citizens more about talking with doctors to ask about alternative pain options.

The Opioid Control Act will give law enforcement more tools to perform drug raids and drug traffickers, according to Stein.

The attorney general said around 75 percent of those in prison in the state either suffer from mental illness, drug addiction or a combination of both.

One thing that would help law enforcement, Stein added, would be to move more people into the healthcare system to be able to afford the care they need.

“If the state of North Carolina … was truly serious about trying to deal with this crisis, which is just the greatest public health and public safety crisis we have ever confronted…we would accept the federal government’s offer to return our taxpayer dollars to us for Medicaid expansion.”

Expanded Medicaid would mean 500,000 more North Carolina citizens without health insurance “would have a means to pay for the medication that they need to treat their substance use disorder.”

Investigating and suing pharmaceutical companies and drug distributors have also been actions Stein said his office has done to stop the opioid epidemic.

Another arm of protection the state’s Department of Justice looks to do is to protect consumers, including seniors and students, Stein said.

While most businesses are trying to do things the right way, he added, “the sad truth is there will always be some companies out there that bend the rules to try to take business through deception or unfairness, and we hold them accountable.”

The last two years, his office has won settlements or awards totaling around $100 million back to state consumers.

Included in his office’s consumer protection efforts is price gouging, specifically what went on in the aftermath of Hurricanes Florence and Michael. Stein said more than 900 clients and six actions are pending.

“When people are desperate, and trees are on the roof, we cannot allow folks to exploit that desperation and steal a buck,” Stein said.

Stein aid he was concerned regarding identity theft and security breaches. In 2016 and 2017, nearly half of the state’s population were affected by both, including himself.

Stein said his accountant suffered a security breach and someone filed federal taxes in his name and claimed his refund.