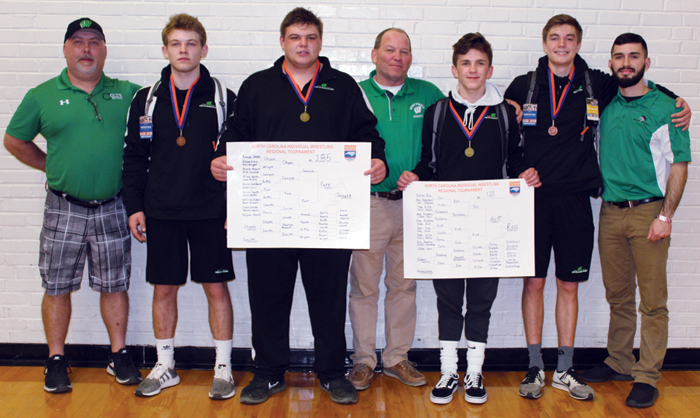 A number of wrestlers from West Stanly in the 2A along with South Stanly and Albemarle in the 1A competed last weekend and qualified to wrestle in Greensboro at the annual NCHSAA wrestling state tournament. The state tournament runs Thursday through Saturday at the Greensboro Coliseum Complex.

Two Colts earned regional titles at the 2A Midwest Regional hosted by Lexington High School while two others qualified high enough to earn berths into the state tournament.

Aidan Hiott, wrestling at 120 pounds, earned his second straight regional title, improving to 47-3 overall this season. The sophomore, whose overall career record is 88-11 heading into state, posted a pinfall and a 19-2 technical fall to reach the semifinals. He posted a 7-6 decision over West Stokes’ Carson Goins in the semis then won the regional title 4-3 over Central Academy’s Hunter Ross. Hiott will open in the first round of the state finals against East Burke’s Arturo Pizon-Castillejos (38-4) .

West’s other regional champion came in the heavyweight division. Jessie Furr (31-6) improved from his third-place finish last season at regional to win the title. He won 2-1 in the opening round over fellow RRC wrestler Brian Smith from Forest Hills, the pinned Central Davidson’s Alex Batts in 4:54. Furr then won with a 5-2 decision in the semifinals versus Trent Smith of East Lincoln, then went to overtime in the finals against CATA’s Nick Swayze, winning 3-2. For his career, Furr now has 99 wins; he faces St. Paul’s Jonathan Salvetti (22-14).

Also wrestling at state will be 152-pounder Jared Watson. A regional champ last year, Watson lost 6-0 in the semifinals to Central Academy’s Aiden Curry. Watson (47-6) bounced back with a 2-0 decision in the consolation semis, then pinned South Point’s Corbin Allen for third place. Watson has 123 career wins and will meet Ledford’s Issac Shelley (22-6) in the opening round.

Korbin McNeill qualified for the state tournament, finishing fourth at 132 pounds after earning a silver medal last year. McNeill is 47-6 overall and has 98 career wins; his first-round opponent at state will be South Granville’s Gage Peters (40-4).

As a team, West finished fifth out of 28 teams.

“We look forward to Thursday…we are looking for big results from our four qualifiers,” West coach Darrel Watson said.

Five wrestlers for the Rebel Bulls advanced to the state finals, including one wrestler who crossed a milestone at the 1A East Regional hosted by Rosewood High School.

Rodney Hammond (30-8) at 160 earned a third-place medal as well as breaking the 100-win plateau with his victories at regional. Hammond got a bye in the first round, then posted a pinfall in 1:03 in the next round over Pamlico’s Trevor Wood. He lost in the semifinals to South Stokes’ Jackson Boles, then bounced back with two second-period pinfalls in the consolation semis and the third-round match. Hammond takes on Robbinsville’s Austin Lovin (21-10) in the first round of the state tourney.

South’s highest finish for any of its wrestlers came at 220 pounds as Khris Mayo (25-8) came within one win of the regional title. Mayo won by pinfall in the quarterfinals in 4:43 over Bishop McGuinness’ Brandon Tubby, then faced a fellow YVC opponent in the semifinals, pinning Uwharrie Charter’s Sergio Saldana in 5:25. He lost in the final 11-2 to West Montgomery’s Nicholas King. East Surry’s Mitchell Edwards (18-1) will be Mayo’s first opponent in the state tournament.

Jaquavius Caraway at 120 pounds won by pinfall in the quarterfinals 3:48 over Lejeune’s Phillip Pittman but lost in the semis to South Davidson’s Timothy Freeze by pinfall in 57 seconds. Caraway (31-14) rallied for a 9-0 majority decision in the consolation semifinal versus Rosewood’s William Kimball and took third place 5-4 over Granville Central’s David Garcia. Caraway faces East Wilkes’ Daniel Ferguson (25-7) in the first round at state.

Hunter Barrier (37-16) finished in fourth place at 132 pounds, reaching the semifinals with a 12-5 decision over Lowell Shotton of South Stokes. Barrier lost a 20-3 technical fall in the semifinals to Rosewood’s Timothy Decatur, but rallied to win by pinfall in 2:37 in the consolation semifinal over East Carteret’s James Lawrence. He then lost by majority decision 8-0 in the third-place match to Shotton. Barrier will open with Robbinsville’s Nathan Fisher (26-8) in the first round.

In the heavyweight division, Cade Whitley (41-5) won in the quarterfinals with a 1:04 pinfall versus Bishop’s Gideon Hope, then lost to Rosewood’s Nyterrius Williams in the semifinals by decision, 7-4. Whitley earned a trip to the state with his pinfall win in 3:55 in the consolation semifinal over Albemarle’s Unique Carvalho, then lost by decision 9-4 in the third place match to Ezekiel Jayne of East Carteret. Whitley will take on Noland Brown of Swain County (31-4) in the opening round.

The Bulldogs will be represented at the state championships by 195-pound wrestler Adrien Little who finished in third place. The junior won by pinfall in 46 seconds in the opening round over Lejuene’s Carlos Granados, then advanced to the semifinals with a 1:18 pinfall versus South Davidson’s Slade Wolfe.

Little lost in the semis to West Montgomery’s Payton Coble by pinfall in 1:55, just his second loss of the season. He bounced back in the consolation semifinals with a 1:40 pinfall win over Bishop’s Garrett Hope. Little (31-2), then pinned Uwharrie Charter’s Jaime Bernal in 3:52 to earn third place.

The Albemarle junior will take on Robbinsville’s Issac Wilkinson (22-8) in the state tournament.