Mary Katherine Kirk Burris, 87, of Albemarle, passed away Monday, February 11, 2019.
Her funeral service will be Friday, February 15, 2019 at 2 PM in the Stanly Funeral & Cremation Care Chapel of Albemarle with Rev. Joe Smith officiating. Burial will follow in the Richfield Cemetery. The family will receive friends from 12:30 PM until 1:30 PM prior to the service. 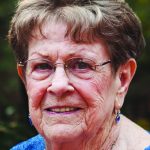