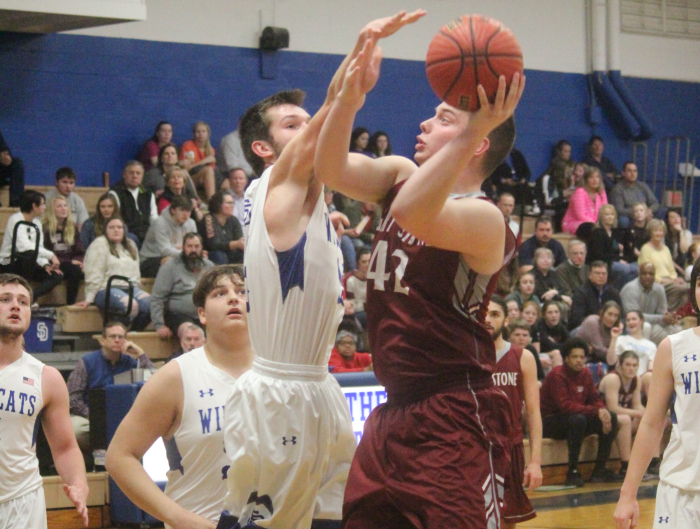 Brennan Bailey finishes at the basket making a left-handed layup in Wednesday's road win for the Knights. (Photo by Charles Curcio)

DENTON — After losing to South Davidson at home last week on its senior night, the Gray Stone men’s basketball team avenged the loss on the Wildcats’ senior night, winning 74-64 Wednesday.

As a team, foul shots were crucial to the win for Gray Stone; the Knights were 27-of-40 at the foul line (72.5 percent), including 24-of-30 in a 33-point fourth quarter. Wednesday’s point total also tied the team’s season-high mark set at Covenant Classical on Nov. 26.

South Davidson shot 9-of-23 on free throws in the game, coming mostly in the second half, more than doubling the team’s offensive output in the first half.

Gray Stone built a small lead early only to see the Wildcats keep the game close; the Knight led 24-19 at halftime. South Davidson got as close as one point in the fourth, but Gray Stone pushed the lead back to double digits en route to the win.

In front of a packed house at South Davidson, Gray Stone coach Joel Childrey said “both teams have a history. I don’t know what it is, but whoever doesn’t blow up usually wins the game.”

Childrey added getting his team to think ahead about the next play is also key, saying “if your focus is on that, the other stuff will take care of itself.”

“A lot of nights, we beat ourselves and just get out of control. When we slow the game down and we make good decisions, we are a great team,” Childrey said.

Childrey said his seniors, like Viscomi, “really pulled through” for the Knights in the win, especially late in the game.

Viscomi credited his teammates with encouraging him and helping to keep him cool in the raucous road environment Wednesday night.

“(South Davidson) comes after you like every play,” Viscomi said. “This (win) was great. They came and beat us on our senior night so we had to give that back to them.”

Gray Stone, who is tied with North Moore for the eighth and final spot going into next week’s Yadkin Valley Conference tournament, wraps up the regular season at home Friday against North Stanly, who lost Wednesday at North Rowan, 79-41.