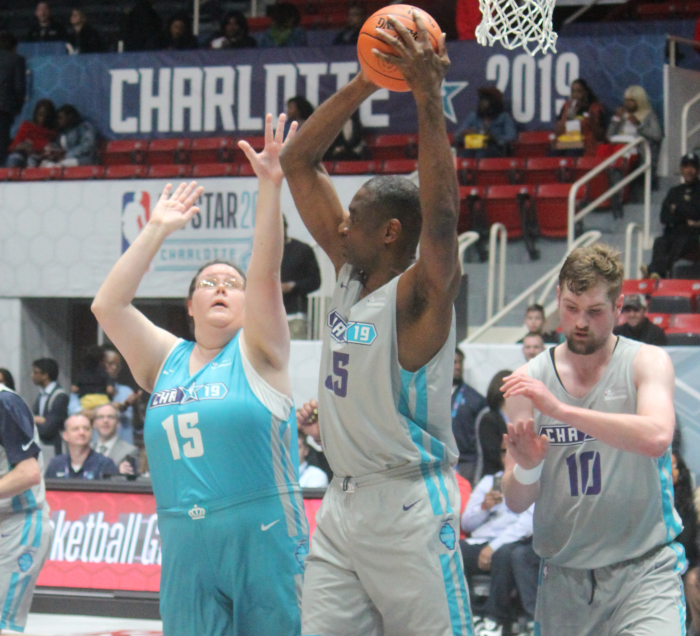 CHARLOTTE — She wore 15 as her jersey number, which is what she normally wears. But to one row of fans, she was No. 1.

Stanly County Special Olympics athlete Kellie Hearne was one of only 12 representatives from around the world who played in Friday’s ninth annual NBA Cares Special Olympics Unified Game at Bojangles Coliseum.

The game kicked off a weekend of All-Star festivities, including a celebrity basketball game which followed the Unified Game.

Friday’s demonstration game was said to “feature athletes with and without intellectual disabilities playing on the same team to highlight the game’s value of inclusion and acceptance,” according to a press release from the NBA.

Before the game, the players on both squads had the chance to meet and mingle, which Hearne said she liked very much. She said the players “were down to earth, nice, humble and had good sportsmanship.”

After both teams were introduced by Miami Heat public address announcer Michael Baiamonte, the teams played two 18-minute halves and the game tipped off with Hearne on the bench to start.

After an early timeout, Hearne entered the game. She had two shots in the first half which did not go. However, she made her presence felt on defense, blocking two shots and pulling down several rebounds. At halftime, Hearne and her teammates led 18-13.

In the second half, one humorous moment saw Hearne standing next to Harper; the former NBA star smiled when she boxed him out trying for a rebound on a free-throw attempt. 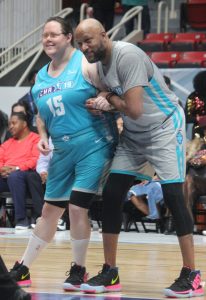 “I have seen him on TV…I just took it and rolled with it,” Hearne said.

The game result went down to the wire, with Mutombo getting a rebound instead of Hearne on a missed foul shot to end the game with the away team winning 27-26.

After the game, smiles abounded on the faces of the former pro players and the Special Olympics athletes regardless of the outcome.

“Being a girl from North Carolina, getting to go and play for the whole state of North Carolina” was also meaningful, according to Hearne.

“When we found out there were only 12 (Special Olympics) athletes from around the world (scheduled to play) and Kellie was one of them, the team was so excited. It certainly was the dream of a lifetime for her to get and meet these players…we’re just so proud of Kellie,” Odell said.

She added the NBA “recognizes that the skill level of these athletes is above and beyond what they’ve ever, ever expected and to get to play with them is a great honor.” Odell also noted the unselfishness showed by players on the court sharing the basketball, like Hearne’s teammates, including the former Charlotte point guard Bogues.

After the game, Bogues talked about playing in the Unified Game, which he has played in previously, saying Friday’s game “was an unbelievable experience for me. I love this game; I look forward to this.”

He added the game is about inclusion and “not leaving anybody out. We don’t leave anybody out whether it’s a wheelchair, a disability or whatever the case may be. They have a passion for this game and they displayed it on the court; it brings joy to me.”

“Basketball is universal; you don’t have to speak it as long as you’re out there playing it,” Bogues added.