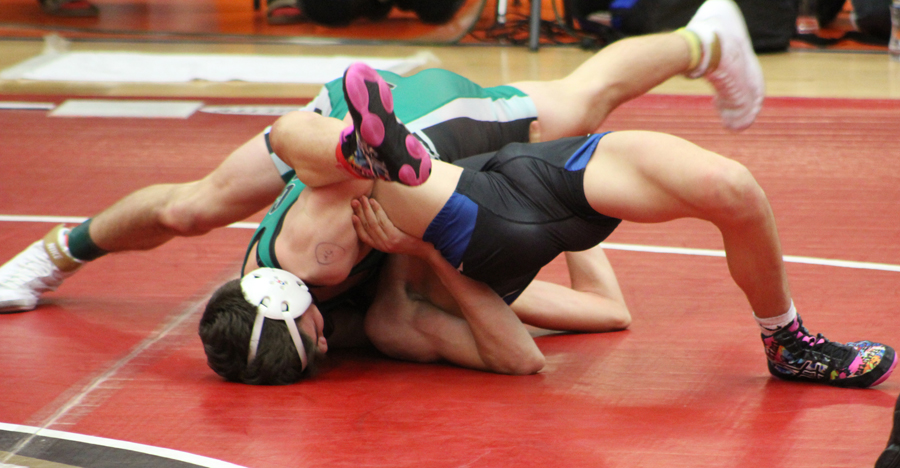 West's Aiden Hiott gets the advantage on an opponent at the 2A Midwest Regionals. Hiott advanced to the semifinals Friday in the 2019 2A state wrestling tournament. (Contributed)

Four West Stanly wrestlers opened the first round of the 2A state wrestling tournament Thursday in Greensboro. Two advanced to the quarterfinals Friday, while the others suffered first-round losses.

Sophomore Aidan Hiott, wrestling at 120 pounds, improved to 48-3 on the season winning by technical fall over Arturo Pizon-Castillejos of East Burke (38-5) with a 16-0 technical fall.

Hiott, the No. 1 seed from the Midwest Regional, advanced to take on Randleman’s Luis Garcia (29-10), who won in the opening round by pin. Hiott moved on to the state semifinals with a 1:43 pin on Friday over Garcia.

In the heavyweight division, senior Jessie Furr posted a 3:02 pinfall versus St. Pauls’ Jonathan Salvetti (22-15). Furr, also a No. 1-seed from the midwest, will face West Lincoln’s Brock Steele (37-8) in the quarterfinals; Steele won a 3-2 decision Thursday over Croatan’s Nathan Waltrip (43-5).

Korbin McNeill, at 132 pounds, fell to 47-7 on the season losing a close 6-5 decision to South Granville’s Gage Peters, putting McNeill into the consolation bracket against Dixon’s Corbin Pugh (31-10). On Friday morning, McNeill bounced back for a pinfall over Pugh in 2:36.

Watson then faced Newton-Conover sophomore Charlie Pettery in the first round of the consolation bracket Friday morning. Watson earned a 7-4 win over Pettery.