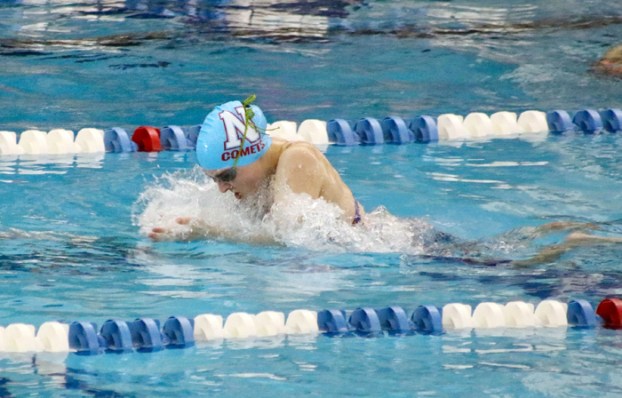 High school swimmers representing schools from Stanly competed recently at this season’s NCHSAA state swim finals at the Triangle Aquatic Center in Cary.
On the 1A side, North Stanly’s 200-yard freestyle relay team of Colbie Lentz, Alex Childress, Rachel Gibson and Emily Almond posted the best finish of any of the county’s swimmers, taking ninth in the event with a time of 1:45.64.
North’s 200-yard individual medley team of Childress, Lentz, Gibson and Madison Shaver missed qualifying for the finals by .04 seconds, placing 17th.
Gibson was the lone individual swimmer for the Comets and also had the top finish for the county individually with a ninth-place finish in the 100-yard breaststroke.
Albemarle’s Meghan Krol qualified for the 1A state event, finishing 20th in the 100-yard freestyle.
For Gray Stone, the team of Maci Holshouser, Katheryne Carpenter, Gracie McGuire and Abby Buechler finished 15th in the 200-yard individual medley relay with a 2:02.29.
Holshouser, McGuire, Zoe Matney and Kinsey Cook placed 14th in the 400-yard freestyle relay with a time of 4:02.41.
The men’s 400-yard freestyle team for Gray Stone, consisting of Cory Nunes, Carson Sperber, Patrick Garifo and Reilly Plopis, finished 21st in the event with a 3:50.97.
In the 2A event, West Stanly’s 200-yard individual medley relay team of Julia Brown, Vanessa Perez, Abby Phillips and Jordan Hatch placed 24th in the state with a 2:10.28.
The Colts’ 400-yard freestyle relay team of Sam Hinson, Christian Perez, Chase Baucom and Jake Hinson swam a 3:46.06 to place 18th overall.
West had one swimmer qualify for an individual event; Jake Hinson placed 21st in the 50-yard freestyle race, finishing in 23.87 seconds.