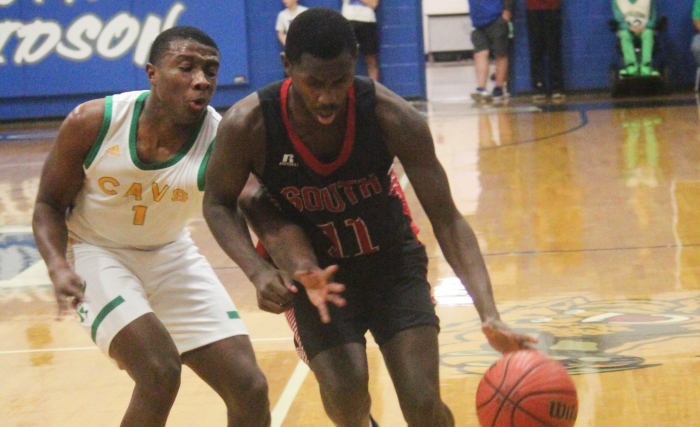 Two individuals playing in Friday’s Yadkin Valley Conference men’s basketball tournament final were both close to their own career benchmarks. One set the mark while another came up one point short as the top-seeded North Rowan Cavaliers won the team’s 17th in a row, 66-65 over No. 2 South Stanly.

Brevin Goodlett was 5-of-5 from the foul line and led the Cavaliers (24-2) with 19. Dayjuwan Cooke added 12, including 8-of-14 at the foul line in the game. He scored his 1,000th career point on a free throw in the final seconds of the game to put North Rowan up by four.

The Cavaliers had a decided advantage in the game at the line. North Rowan was 20-of-30 on foul shots, while South shot 13-of-20 at the line.

South led by as much as eight late in the first half and maintained a 30-26 halftime advantage. The game was tied late into the final period until the Cavs pulled away with free throws.

“We knew we were in for a battle; North Rowan has a great basketball team,” South coach Sean Whitley said, adding the strategy coming in was to try and shut down the Cavs’ inside game.

“Give (North Rowan) credit; they were able to get into the paint in the second half.”

Whitley also credited the play of Jitavis Huntley in the low post saying he “changed the nature of the game early.” Foul trouble limited Huntley as he fouled out of the game midway through the third.

South will qualify for the NCHSAA state 1A playoffs starting on Tuesday.