“Once in a generation”: Oakboro community mourns the passing of local icon Ted Lilly
ADDC cancels Holiday Tour of Homes due to COVID

Ernest M. “Bear” Knotts was born in Ozark, Alabama on November 27th, 1924, the second of five children of Ernest Tindall and Ila Morgan Knotts. Thus began an incredible journey of hard work, perseverance, true love, and an admirable legacy.
Like many of his generation, his formative years were difficult as his family worked their way through the Depression. 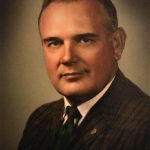