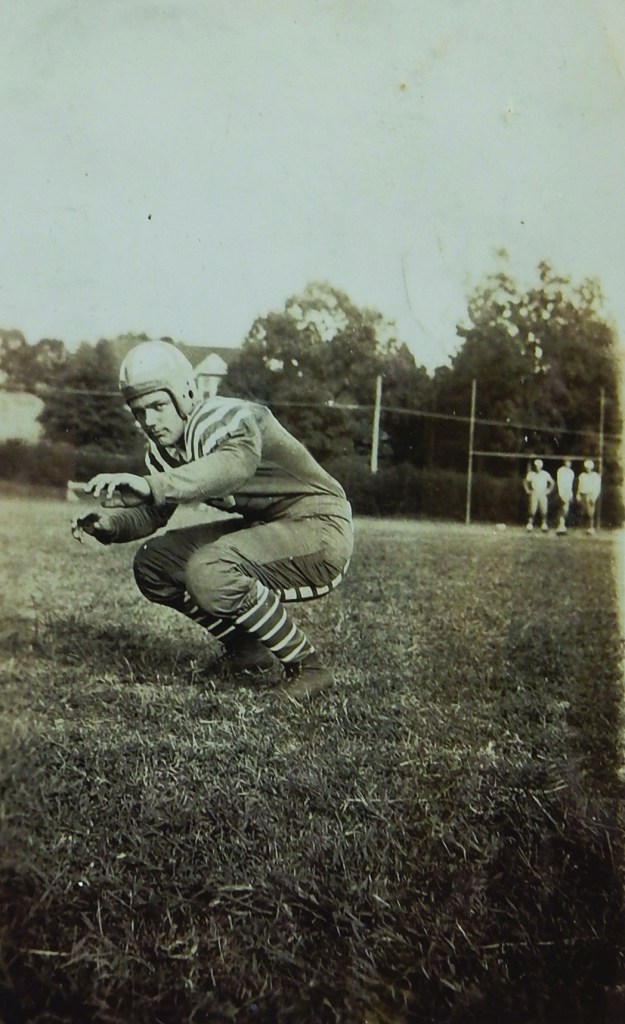 At Albemarle High School, Bear Knotts had a choice between attending Notre Dame and Duke University. He picked the Blue Devils, a team he helped lead to many Southern Conference championships.

In addition to family and friends, the Duke Blue Devil may have a tear in its eye this week, but it’s not because his team lost a game.

Bear Knotts, who played football for Duke during the 1940s and helped create one of the university’s lasting legacies later in life, died Feb. 22 at age 94.

Knotts bled blue, whether it be of his high school Albemarle Bulldogs or the Duke Blue Devils.

“He was just the type of guy that was always at a football game or basketball game. Just a diehard Duke fan. Extremely loyal,” said Jack Winters, associate athletic director at Duke University.

Winters, who oversees the Iron Dukes program, has been with the university since 1989.

He said Knotts was a founding member of the program in 1970.

“You knew he cared for you and the program and everything we had going on here,” Winters said. “He just had that great energy about him. Everybody loved Bear Knotts.”

In a 1993 interview with The Stanly News & Press, Knotts talked about his decision to attend Duke over Notre Dame.

“Recruitment was a lot different then than it is now,” said Knotts from his Blue Devil-clad office. “Coach [M.J.] DeLotto asked me which school I wanted to attend, and he arranged the scholarship from there. I wanted to go to Duke from the beginning.” 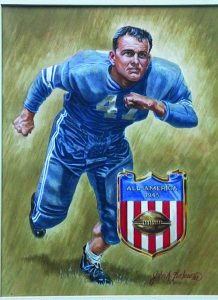 Upon his induction into the Duke University Sports Hall of Fame in 1993, Bear Knotts received an art print of his likeness in his Duke Blue Devils uniform.

During his freshman year, he played behind former Dallas Cowboys assistant Jamie Myers, until Myers was transferred out with the Marines for World War II. Knotts stepped up in the middle of the season and started the rest of his time at Duke.

Knotts, who played under famed coaches Eddie Cameron and Wallace Wade, was a lineman for the Blue Devils from 1943-46, playing nose guard on defense and right pulling guard on offense.

The 1944 team won the Southern Conference title and defeated Alabama in the Sugar Bowl 29-26 on Jan. 1, 1945. Knotts earned third team All-America honors by the College Press that year, according to Duke archives.

The two-way guard earned All-America and All-Southern Conference honors in 1945.

“You really didn’t think about playing both ways, it was just something you did,” Knotts told The SNAP prior to his induction into the Duke Sports Hall of Fame in 1993.

“Techniques are a lot different now. Weight is a big advantage these days, but in my day, quickness was more important.”

Knotts helped Duke garner a 24-12 record over his career, along with three Southern Conference championships.

Following college and a stint in the U.S. Navy, Knotts had a slot in the 1947 College All Star game and received an invitation to the Blue-Grey game. He was drafted in the fourth round by the Chicago Bears of the National Football League and was a first-round pick of the Buffalo Bills of the American Football League.

Published reports say he realized an NFL check was not enough to support he and his wife, Eleanor. So he began work for Southern Bell and played semi-pro football with the Charlotte Clippers for three years.

Bob Harris, who for many decades was the broadcasting “Voice of the Blue Devils” for basketball and football games, remembers knowing Knotts not just through Duke, but also during Harris’ high school years.

Harris was a manager for the Albemarle football team his sophomore through senior years.

Knotts was an assistant coach for Coach Toby Webb. Harris said he learned much from all of the coaches.

“He had a great reputation for knowing what the game of football was about,” Harris said of Knotts. “I enjoyed being a manager and being around those guys.”

Harris said his time as a manager helped him later on when he was a broadcaster.

“I learned my football that way,” he said. “I watched Coach Webb and the assistant coaches to see how they reacted.”

When Harris landed the broadcasting job at Duke, he came to further know Knotts and his wife through their support of the program and attendance at the majority of the home games.

“He knew his football and just about everything else, too,” Harris said. “He was just a really smart man. He had a great mind and a great want to help people in the business.”

Harris said Knotts was known nationally through his career.

“He was just really, really good,” Harris said. “They knew who Bear Knotts was and what he meant to Duke University and Duke football.”

Harris inducted Knotts into the Stanly County Sports Hall of Fame in 1991.

“It was just a great family and one that Stanly County will miss as a family,” Harris said.