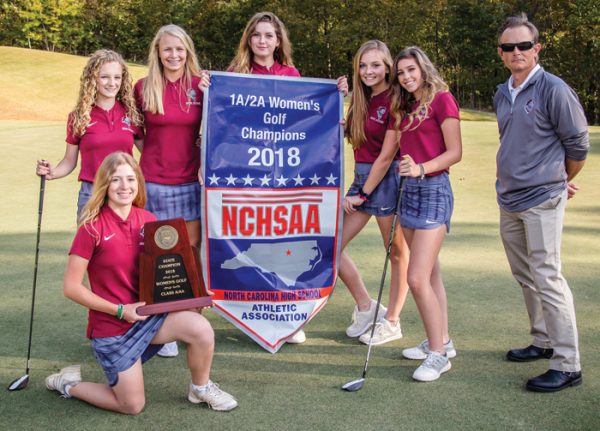 Women’s golf in the North Carolina High School Athletic Association dates back to 1969 when Grimsley won the first state championship. The schools competed together until the competition eventually started to split into classifications.

Gray Stone claimed the 1A men’s cross-country title in 2009 and a women’s title in cross country in 2015.

“I feel the season went fairly well; we had a couple of matches during the season where we maybe had a little stumble,” Phillips said, noting the team had reached the state finals two seasons before, finishing while having two individuals play in the state match last season.

“But when they needed to play, they performed,” he said.

The season for women’s golf starts the first week in August where players and the coach are either on a driving range or putting green, usually at either Red Bridge Golf Club in Locust or Piney Point Golf Club in Norwood.

Before the season, Phillips, who has coached the women’s team for three years and the men’s team for two at Gray Stone, said he thought the women “had it in them” to challenge for a state championship.

“I thought we would go and place. It really didn’t hit me that these three girls could actually go win it until regional,” Phillips said, referring to senior Lauren Denhard, sophomore Aliza Simpson and freshman Katelyn Griggs.

“At the beginning of the season, I felt like we were all kinds of rusty and needed a lot of practice…the start of the season was kind of rough,” Simpson said, even though she added she and her teammates practiced their games individually in the off-season and summer.

Denhard, a senior on the team, agreed with Simpson’s assessment, adding the Knights “had some (early) matches where the team played great,” but a few others in the middle of the season where the team struggled “motivated us to work harder and become better.”

She added the team “used our low points to help us grow as a team and help us work harder in the long run.”

The Yadkin Valley Conference, of which Gray Stone is a member, does not have enough schools fielding teams to play a conference schedule. Therefore, Gray Stone “has to go and find matches,” Phillips said.

During the regular-season schedule, the Knights played several against Mount Pleasant and South Stanly along with Cox Mill, Hickory Ridge and West Davidson, usually around one match a week but sometimes Gray Stone plays twice.

Because the Knights do not have conference play, the team has to qualify for regional in a different manner. Golfers take their top-five nine-hole scores for the season; the average for those rounds must be lower than 55.

“As we progressed through the season, we significantly got better. It takes a lot of determination; you’re out there every day just trying to better yourself to prepare for regional and state,” Simpson said.

Having only played golf for two years, making regional was a goal for her, which she accomplished last season, but she admitted she “didn’t see myself going any farther then that.”

Gray Stone had six players to qualify for regional, but it was Simpson, Griggs and Denhard who qualified for the state championship.

Griggs made it through to the state final in just her first season playing high school golf. But she is no stranger to the sport, having played it about four or five years.

“It was a really fun opportunity to be part of a team. We just all got really close,” Griggs said, adding it was fun to watch everyone on the team get better throughout the season.

Before the season, Denhard said she thought the Knights could finish in the top three in the state but her opinion changed after the first round of the 36-hole state final when Gray Stone was three shots out of first place.

“It became a reality after the first day,” she added.

It was not the first time Denhard and the Knights had been within shooting distance of a state title. Three season ago as a freshman the team was tied for first place after the first round.

Denhard had shot an 81 and was fifth in the individual standings, with Griggs shooting 89 and Simpson posting a 106.

The final round of the state tournament, however, saw the Knights go charging past Raleigh Charter to win by 10 strokes.

“I had coached Lauren for three years and I don’t know what got into her. She was hitting the ball probably 30 yards farther than she normally did,” Phillips said. “She played a round of 18 holes of golf that I’ve never seen her play a consecutive 18 like.”

Denhard only missed three greens in regulation in her second-round efforts, which led to two bogeys and a double bogey on those three missed holes. She finished shooting a 77 for a total of 158, putting her in fourth-place overall as an individual.

On the first day, Denhard said she went double bogey and back-to-back bogeys through the first four holes, putting her five strokes over par. She said from that point on, she “got into the zone and stopped beating myself up for playing bad…I started attacking the pins and hitting everything really well. I guess reality started kicking in and saying, ’Yes I can do this.’ I was playing what I would say was one of the top three rounds I’ve ever played.”

With her being longer off the drive, Denhard said she felt the adrenaline was kicking in and she “was lasered in,” missing only one shot on the back nine of the second round while firing three birdies.

Griggs’ experience at the final was different from Denhard’s in that she said she became nervous about it, which is not uncommon because, as she put it, “I get nervous before everything.”

Her better round came in the first round, shooting 89, then following up with a 93 in the second round, but like Denhard, she got off to a rough start on the first day.

“I got it together and realized, you know, that I was just happy to be there,” Griggs said.

She added the event became more fun and her nerves got out of the way in the second day.

Phillips said all three of the Knights’ golfers that day in the finals “composed themselves” and “never got down on themselves.”

Gray Stone’s women’s golf title is just the second title for a team from Stanly County. The 2018 Gray Stone team joined the 1998 Albemarle men’s squad as the county’s only championship golf teams.

As far as the future, two of the Knights’ state championship golfers will return for next season, Griggs and Simpson, while Denhard will play next season at Belmont Abbey College.

Griggs said her goals for next season are to reach the state finals again and shoot “a way lower score” than she did at this season’s finals.

Simpson said her goals are similar to return to state and added she hopes the team can “live up to the standards that we have had this year, continue to work hard and maybe get there as a team again next year.”

Golf, Denhard said, is something she enjoyed because of the team aspect, saying she loved “getting to know my teammates pretty well. I like supporting them and I have fun playing with a group of people versus playing by myself.”

Griggs said she enjoys the sport of golf’s outside nature as well as playing golf with her father and also golfing with friends.

Simpson said she liked to be outside playing a sport that is not “a high-paced contact sport.”

“It’s a sport you can play your whole life; it’s not something that once you’re out of high school will just go away. It’s something I can take with me throughout my life,” Simpson said.

The third, he said, was coaching the Knights to the state title, a moment he said he will never forget.