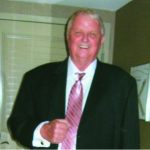 Born October 16, 1943 in Stanly County, NC, he was the son of the late Raymond Elwood Burleson Sr. and Vergie Earnhardt Benner. He was a retired Steel Worker with the Daniel Corporation and was a Charter Member of Albemarle First Assembly helping lay the first brick.
Mr. Burleson was involved in the creation of the Stanly Arts Guild.
He and his wife founded Shirwood Ministries at Oak Island, NC and ministered to the homeless. Woody shared Jesus with everyone he met.
Mr. Burleson is survived by his wife, Shirley Yates Burleson of the home, a son, Kenneth E. Burleson of Concord, daughter Sandra Gouge of Albemarle, stepson Daniel C. Lewis, brother John R. Burleson of Greensboro, NC, sisters Barbara Bailey of Fuquay Varina, NC, and Dian Deal of Lexington, NC, 7 grandchildren, and 3 great-grandchildren. He is also survived by Addison Cord and his family who have been a special part of his life.
He was preceded in death by his first wife Charlotte Davis Burleson and a brother Jerry Burleson.
Memorials may be made to Hospice of Stanly and the Uwharrie, 960 N. First St., Albemarle, NC 28001.