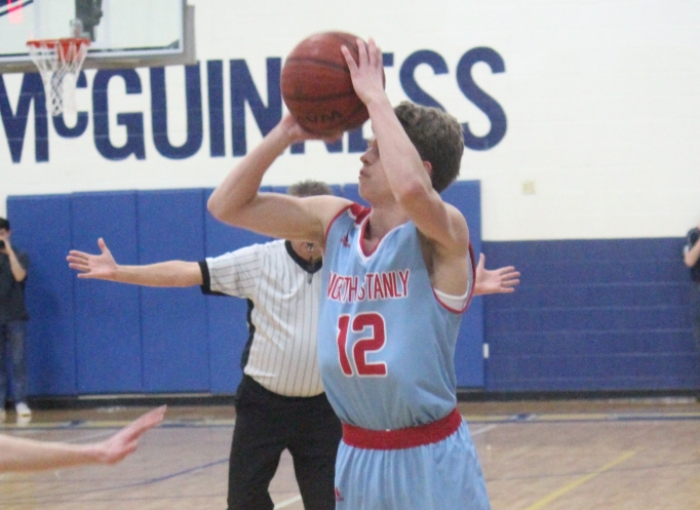 Since joining the 1A classification, the North Stanly men’s basketball team had never gotten past the third round of the state playoffs until this season when the No. 21-seeded Comets advanced to Tuesday’s fourth-round matchup with No. 9 seed Bishop McGuinness.

The Villains were coming off a historic win of the team’s own in the third round, having beaten top-seed Winston-Salem Prep for the first time in 26 games dating back to Bishop’s 2009 state-championship season.

In what turned into a historic season for one offensively-prolific Comets guard, having made well more then 100 3-pointers this season, North came up one trey short in a 66-63 road loss to the Villains.

Senior guard Bryson Childress again led the Comets (19-11) with 23 points, bringing his final career total to 2,187 points, which ranks 22nd on the NCHSAA all-time list. He also set the county mark for most career points by any player, male or female, with his final tally.

Carson Lowder added 16 points, including 14 in a second-half where North outscored Bishop by five. Nalik Veasley added nine for the Comets, while Cooper Hogan and Koby Poole scored six each. 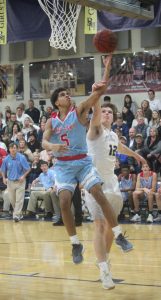 North’s Koby Poole scores in the waning seconds of the third quarter in Tuesday’s playoff game. (Photo by Charles Curcio)

Mac McAlhaney and Andrew Budzinski scored 16 each to lead the Villains (22-8), while Cam Caroway added 15, all in the first half.

Budzinski and McAlhaney accounted for 21 of Bishop’s 33 second-half points. Bishop’s two leading scorers in terms of points per game entering Tuesday, Caroway and Jake Ledbetter, were limited to a combined 17 points in the game and only two in the second half.

A slower paced first quarter saw the host Villains shoot 6-of-9 and break a 10-10 tie with an 8-2 rush over the final two minutes of the period. Bishop then opened the second with a 8-3 run and led by double digits early in the quarter.

The Comets answered with an 8-0 run, including three Hogan free throws, a Childress three and a bucket from senior forward Garrett Clark. North added just two points over the final 2:30 of the first half as Bishop pushed the lead back to 35-25 at halftime.

Bishop maintained a comfortable lead until the final minute of the third period, when a Lowder three and a bucket from Poole with 3.9 seconds left pulled North within five, 51-46.

But the Comets had one final rally in the fourth quarter. Trailing by seven with under four minutes left, a free throw and  then a steal and layup from Childress, along with a Poole bucket, made it a one-possession game, 60-58 in favor of the Villains.

North got within one point on a Lowder three-point play with 2:15 left, then had a chance to tie the game after McAlhaney hit two foul shots. However, a turnover on a bad pass by the Comets gave the ball back to Bishop.

Forced to foul, the Comets quickly went over the limit and put McAlhaney on the line for a 1-and-1, where he made both. Childress made it three points again with a layup with 52 seconds left. Bishop ran 30 seconds off the clock and forced Poole to foul McAlhaney again.

With 21.7 seconds left, McAlhaney missed the front end of a 1-and-1 and Veasley cleared the rebound. In the front court, Childress took a turnaround jumpshot at the top of the key with McAlhaney in his face and missed, but Lowder boxed out Caroway allowing Cooper Hogan to get the rebound. Before he could get to the corner and shoot another three, the Comets called timeout.

Time was added back to the clock giving North the ball in the front court with 4.4 seconds left. Clark found Lowder, whose long three hit the front of the rim. Before the Comets could rebound and get another shot up, the clock ran out.

“Like we tell our kids, the turnover in the last minute and a half means no more and no less than the turnover we make in the first,” North coach Paul Childress said. “It’s a combination of play a full game and every play matters.”

The Comets coach said his team struggled to do was stop Bishop from scoring from their offensive sets.

“(Bishop) is very well coached. They are very good at running a lot of sets and patterns. So we tried to run stuff that they couldn’t run patterns against.”

He also noted players like McAlhaney and Budzinski made plays and were sources of offense for which the Comets were not expecting.

Bishop coach Josh Thompson said he felt both teams in Tuesday’s game were similar in how the teams play and what they try to do. Recalling a game at North two years ago, the Bishop coach said Bryson “had a big night as a sophomore so we knew he was really good.”

He added North played well in limiting Ellington’s touches at the basket, but the play of Budzinski attacking the basket was big as well.

“We feel like we have a complete team where we can score in different ways. North Stanly forced us to do that tonight. Hats off to them for their efforts and their game plan. It was a great game,” Thompson said.

Bishop McGuinness will take on another Yadkin Valley Conference team on Saturday in the regional finals when the Villains take on No. 3 North Rowan. The Cavaliers advanced with a 69-56 double overtime win at the Community School of Davidson on Tuesday night.

Regarding the team’s season, Coach Childress said “this group of kids from November to now
has gotten so much tougher, so much more competitive and so much better. We’re proud of that.”

For the Comets, the team graduates Childress, Veasley, Lowder and Clark this season.