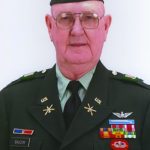 He is survived by his wife of 67 years, Jane Kimrey Baucom; a son, Billy J. Baucom Jr., of Elon, N.C.; a daughter, Pamela Baucom Wallace, of Alpharetta, Ga.; eight grandchildren and nine great-grandchildren. He is also survived by one brother, Bobby Gene Baucom of Las Vegas, Nev.
Col. Baucom attended Oakboro and East Albemarle elementary schools. He graduated from Albemarle High School in Stanly County with the Class of 1950.
He received his Bachelor’s degree in Business and Economics from the University of Nebraska at Omaha in 1970, and received his Master’s degree in Economics from North Carolina State University in 1974.
Col. Baucom entered the Army from Stanly County in 1957. He graduated from Officer Candidate School at Fort Benning, Ga., and was commissioned a second lieutenant of infantry on June 17, 1960. He completed Army Fixed Wing Pilot’s Training at Fort Rucker, Ala., in 1961, Army Helicopter Flight Training at Fort Walters, Texas in 1962, and completed Army Parachute Training in 1967.
He was a 1971 graduate of The United States Army Command and General Staff College. Following his retirement from the Army in 1977, Col. Baucom was employed by the N.C. Department of Revenue in Raleigh for 17 years.
During his 20-year military career, Col. Baucom was awarded The Bronze Star Medal, The Meritorious Service Medal, 15 awards of The Air Medal with the 12th being for Heroism, the Army Commendation Medal with double Oak Leaf Clusters, the Good Conduct Medal, the National Defense Service Medal, the Vietnamese Service Medal with Triple Bronze Stars, the Korean Defense Service Medal, the Vietnam Cross Of Gallantry with Palm, the Vietnam Cross of Gallantry with Bronze Star, the Republic of Vietnam Campaign Medal with “60” Device, the Expert Infantryman Badge, the Army Parachutist Badge, the Senior Army Aviator Badge, the Expert Marksmanship Badge with Rifle and Pistol Bars, and the Sharpshooter Marksmanship Badge with Carbine Bar.
The family will receive friends at Westwood Baptist Church, 200 Westhigh St., Cary, on Friday, March 8, from 10 a.m. to 11 a.m. A funeral service will follow immediately in the church. The burial will be in the Oakboro (Stanly County) Cemetery at 2:30 p.m. Friday, following the service.
In lieu of flowers, memorial donations may be made to Transitions LifeCare or The Westwood Baptist Church Building Fund.