CHAMPIONS OF STANLY COUNTY: Mandy Huff Adkins went from soaring like a Comet to swimming with the Gators 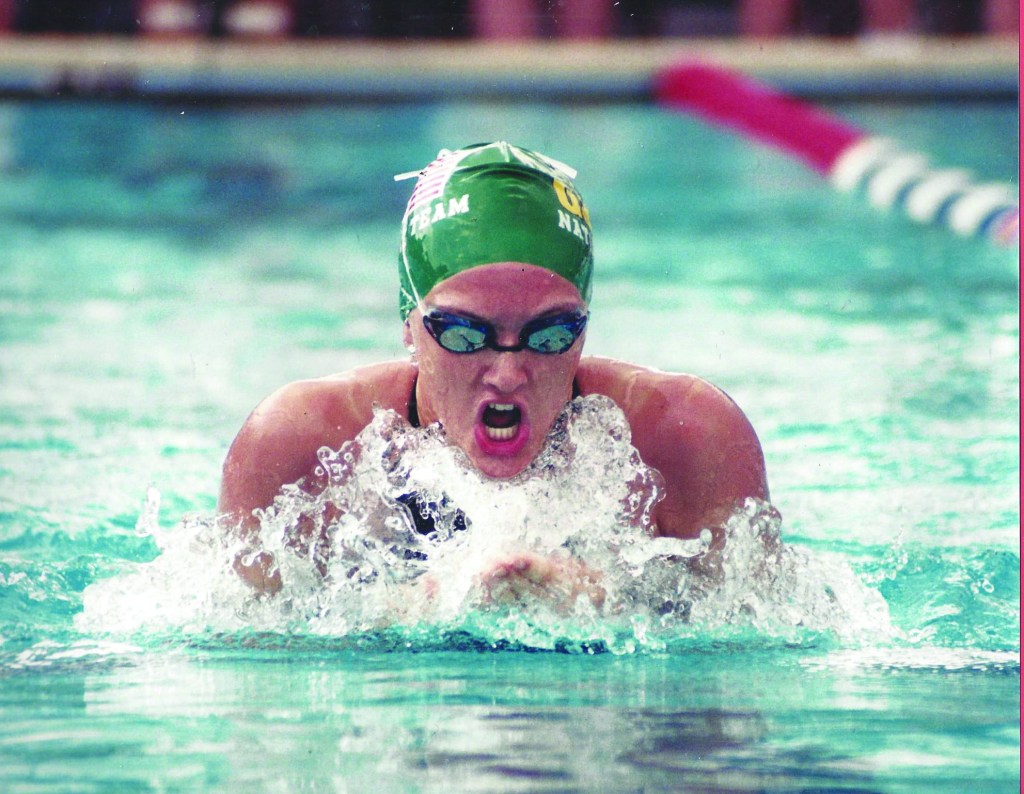 A stellar career at North Stanly High School led to further opportunities for Mandy Huff, such as swimming on the nationally-ranked University of Florida team.

To say things have gone swimmingly for Mandy Adkins would be an understatement.

Adkins, 35, of New Bern, lives with Bradley, her husband of eight years. He is a dentist, she is a data analyst for The Lewin Group, a consulting group based in Washington, D.C. They have two children, 4-year-old son Barringer and 2-year-old daughter Bennett.

But what she is up to now is the “kiddie pool” portion of this story.

Adkins is perhaps best known in Stanly County for the work she did with water.

She is the former Mandy Huff, who helped set a course for competitive swimming in the county and racked up many accolades along the way.

She was part of the first high school swimming team in Stanly County.

Adkins began swimming when she was 5 months old, according to mom Kelley Huff.

“Swimming was important to our family because of safety reasons,” Huff said. “My parents had put a pool in at their house two years before Mandy was born and the summer before she was born in October several children died in pool accidents in surrounding counties. A promise was made to my unborn child that she would swim before she walked and that she did.

“Mandy actually started swimming at 5 months old,” she added. “It was a parent-child class and she was the youngest in the class. I begged the instructor to allow us to join the class, which was designed for babies 6 to 36 months old. Mandy took to the water immediately.”

Many laps of the pool later, Adkins was ready to begin high school. Prior to her daughter’s freshman year at North Stanly, Huff campaigned for a swim team to be added at the school.

“I had been promised a swim team in the spring of Mandy’s eighth-grade year and then when I called to check on the swim team in October of her freshman year, I was told, ‘sorry, we were not able to get it together.’ I was not a happy mom.”

Huff called Stanly County Schools athletic director Bob Johnston on a Friday afternoon, pleading with him to help get a swim team started at North.

“By Monday morning he had it up and running. The rest is history,” she said.

“Without these two, swimming would not be where it is at today,” Kelley Huff said, extended thanks to both. “It is amazing to go to the YMCA on a Friday night in the fall and not be able to get in because of all the swimmers and parents there.”

“She was just so fantastic,” Adkins added of her coach. “We basically had to start the swim team. It wasn’t really established then. Coach Karen took a chance on us. You’ve just got to be so thankful that people will give you a shot.”

All Adkins needed was an opportunity, and she swam away with it.

She brought home silver medals at the state meet during her freshman year in the 100-yard breaststroke (1:09:03) and the 200 individual medley, where she had to swim 50 yards each of the backstroke, breaststroke, butterfly and freestyle (2:12.88).

“We’re very proud of Mandy and the accomplishments she has made,” Karen Smith said following the wins in a 1999 interview with The Stanly News & Press. “She has been a very important swimmer of the first swim team in Stanly County.”

She was also selected Most Valuable Swimmer for her sophomore and junior years in the Central Carolina 2A Conference, and was runner-up her freshman year.

Adkins was successful, but to reach her goals she had to make a tough decision.

She moved to Virginia during the summer before her senior year and completed her high school education at William Byrd High School.

By moving to Virginia, she lost her eligibility to swim in high school. She focused on her training with Doug Fonder, founder of the Virginia Gators in Roanoke.

“We had watched his kids at YMCA Nationals and they were amazing,” Kelley Huff said. “Mandy knew he could take her to the next level. Mandy needed Senior National times to be looked at by Division 1 schools like the University of Florida. After training with the Virginia Gators the summer before her senior year she decided the week before school started to stay in Virginia for her senior year. The following spring at YMCA Nationals she was able to swim two senior national cuts within 30 minutes of one another. The first being in the 100-yard Butterfly. She got out of the water, Doug told her great job, get ready for the 200 Breaststroke. And in less than 30 minutes she swam her way to a second senior national cut.”

That bigger team led her to more national exposure, which created offers for college.

“I didn’t tell my mom Duke wanted me,” said Adkins, a Tar Heels fan, her mom, a fan of the Blue Devils.

“They were one of the top-ranked schools for swimming,” she said.

Ryan Lochke was on the Florida team when Adkins was there. The 12-time Olympic medalist was a two-time NCAA Swimmer of the Year, 24-time NCAA All American and 7-time NCAA champion. 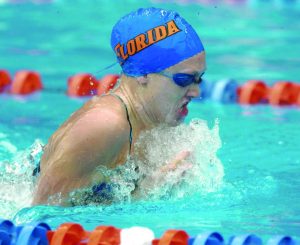 Mandy Huff Adkins said she did not tell her mom, a diehard Duke fan, that the Blue Devils wanted her for their team. Adkins, a Tar Heels fan, however, chose swimming powerhouse Florida to further her love of the sport and her education. She obtained Bachelor’s and Master’s degrees in family, youth and community science. She now is a consultant for a group which monitors Head Start, she said, “working to ensure that all Head Start agencies provide high quality child care services to the more than 1 million children cared for each year.”

“It was a really good team. Good people down there,” she said.”I knew I could learn a lot while also being able to swim and keep pursuing my passion.”

Adkins lets her mom keep up with all scrapbooks of championships and records, but she says she knows she was “pretty close” to Olympic standards.

But she broke her hip prior to the Olympic trials.

“My roommate went to the Olympics for Germany that year,” Adkins said, speaking of the 2004 Athens Games. “She was my training partner.”

Rich L. DeSelm was an assistant coach with University of Florida Swimming from 2000-2006.

“I remember Mandy as a confident high-school student/swimmer who, on paper, was a stretch to swim at Florida,” said DeSelm, who has been the coach of UNC Swimming since 2007. “Our head coach, Greg Troy, liked her and she joined us. While talented, Mandy was not as gifted as some of the swimmers there, but she worked hard and improved and worked her way into having a significant role.

She always did well in school, nor was she ever a problem.

“One or both of her parents and, often, her siblings, came to most all of her competitions,” he added. “They were a hard-working, close family. You could tell the Huffs had strong family values and I believe this grit gave Mandy the resolve to face many challenges at Florida, in the SEC and the NCAA.”
In addition to being a team captain her senior year, she had All SEC Honors all four years, All American Academic Honors and President’s Honor Roll her sophomore, junior and senior years. She also received the Leadership Award her senior year.

In her five years at Florida, she obtained her bachelor’s and master’s degrees in family, youth and community science.

She then went to UNC and received a doctorate in education.
Adkins credits her family for her success.

“Without the family support, I wouldn’t have gotten anywhere I was going to go,” she said. “The dedication my family had to get me where I wanted to go was truly something special.”

All her siblings are younger than Adkins.

Katie and her being closer in age led to a friendly competition, she said.

“After I retired, and she was still swimming, she’d called me ‘old woman’ and kick my butt swimming,” Adkins said. “That’s what siblings do and it’s wonderful.”

Adkins said she still considers Stanly County home and credits the support from here to her success.

“While swimming is a mostly solitary sport — just you and the water — I could have never gotten to the point I did without the love and support of my family and our community,” she said. “While Stanly County is rural, our town provided so much guidance, help and encouragement along my journey. In particular, Tom Keen was always someone who ‘made things happen’ in order to help me pursue my dream. He always believed in me. My family, the hours and days spent together at a pool were innumerable. I recognize the sacrifices others had to make in order for me to be able to succeed.”