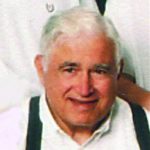 Other activities included the advertising club, accounting club, the “C” club and some of the college dramatic productions. After making a name for himself in scholarship, leadership, service and activities, he was named to Who’s Who in American Colleges and Universities.
After graduation from college, Mr. McCoy was associated with the Social Security Administration as a claims representative in Salisbury and later as an operations supervisor in Charlotte. He was named assistant district manager in Greenwood, S.C., and then later named manager of the first Albemarle Social Security office.
He was a member of the Albemarle Lions Club for 40 years and served as president and district governor. He was also in the Stanly Investors Club for 25 years and served as its secretary for 10 years.
After 30 years of civil government service, Taft took early retirement and opened McCoys Realty with his wife Ann, who retired from teaching high school. While working at this business, he dealt mainly with rental houses but also worked for Intercarolina Financial (stocks) in Greensboro.
Malcolm Lowder, Taft’s friend and associate, worked closely with Taft during his entire real estate career and continues to work with Ann in this business. Taft loved Malcolm as a brother.
Taft and his wife, the former Ann Ridenhour, have one daughter, Lisa McCoy Reid (Steve) of Greensboro, and one son, Mark Bradley McCoy (Candy) of Winter Park, Florida. He has four grandchildren, Brandon (University of Alabama), Jedd (North Carolina State University), Grace (Cedarville University in Ohio) and Markus (University of Florida). His sister, Julia McCoy Goodnight (Jimmie), and sister-in-law, Delette Kluttz (Warren), also survive.
He was preceded in death by his parents, his brother Daniel McCoy (Carolyn survives) and his sister-in-law, Joan Ridenhour Scercy. Nieces and nephews also survive.
In Salisbury, Mr. McCoy attended Maupin Avenue Presbyterian Church and in Albemarle, he attended Central United Methodist Church. Earlier, he and his wife were associated with Mount Tabor United Methodist Church where he taught teenagers, was Sunday school superintendent, and chairman of the Official Board, while Ann was organist.
Memorials may be made to Maupin Avenue Presbyterian Church, 100 Maupin Ave., Salisbury, NC 28144, or Central United Methodist Church, 172 N. Second St., Albemarle, NC 28002.
The family would like to thank all of his caregivers who faithfully gave of their time and themselves.
In addition, the McCoy family would like to thank all of his renters who have continually asked about Taft during his illness.
We hope all of you will join with family and other friends on March 12 for the celebration of his life.
Visitation will be held from 10:30-11:30 a.m. on Tuesday, March 12 at Stanly Funeral Home in Albemarle. The funeral will follow at noon.
Lunch will be provided by the family at the funeral home for anyone that is able to stay.
A graveside service will follow at 3 p.m. at Rowan Memorial Gardens in Salisbury.
We rejoice in knowing that Frank Taft McCoy Jr. now lives with Jesus. Taft accepted Jesus early in his life and clung to his faith in Christ tightly all through his life.
Taft knew that he was going to Heaven because of what Jesus did on the cross. He got it. He knew righteousness comes from God alone.
Furthermore, he knew that he had no chance of Heaven without Jesus but an assurance of Heaven with Him.
It is the prayer of our family that each person now reading about the life of Frank Taft McCoy Jr. will know Jesus as their personal Lord and Savior.