Charges have been filed following the death of a passenger who was ejected from a car crash in February near Aquadale.

The driver of the car, David Stuart Hiatt, 54, of Albemarle, has been charged with involuntary manslaughter, reckless driving to endanger and driving left of center for the Feb. 4 crash that led to the death of Mary Coulter Simpson, 52, and injured her boyfriend, Charles Lamb, 50, of Aquadale. 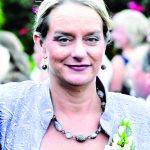 A N.C. Highway Patrol report lists Hiatt’s 2003 Ford Mustang as traveling up to 80 mph, with an estimated 60 mph speed at the time of impact. The speed limit in this section of N.C. Highway 138 is 55 mph.

In his report, Trooper D.S. Paige says the car was heading south on N.C. 138, about 3.3 miles south of Albemarle near Mauldin Road. The driver traveled across the centerline and overcorrected, traveling off the right side of the road and striking a ditch, according to the report. The vehicle rolled several times before coming to rest in the roadway.

Paige said Simpson was ejected from the vehicle. She was not wearing a seatbelt and was pronounced dead on the scene.