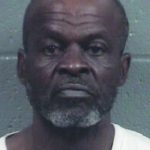 A lady and her husband were in an argument near Walmart, Capt. David Dulin said. The woman decided to not go home and met with a friend.

They later met other acquaintances and that’s when the incident happened, the woman told police.