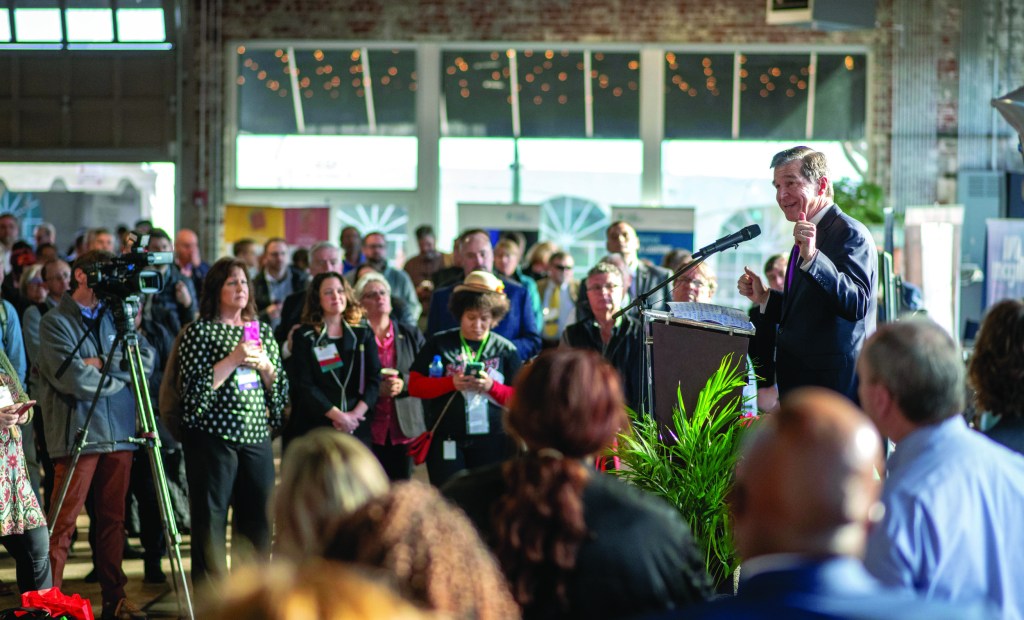 JON C. LAKEY/SALISBURY POST NC Governor Roy Cooper visited and spoke to the attendees of the Main Street Conference in downtown Salisbury at the F&M Trolley Barn on Wednesday morning before the days meetings begin.

Gov. Roy Cooper at the N.C. Main Street Conference on Wednesday recalled his childhood in a small town and looked to the future as downtowns in rural areas set their sites on revitalization.

In his speech in Salisbury, Cooper painted a picture of his youth in Nashville, in eastern North Carolina, where he spent time on its then-thriving Main Street to sell watermelons, pick up a drink from the drug store and get a haircut at the local barbershop. A thriving downtown doesn’t come easy though, Cooper said to the large crowd at Salisbury’s F&M Trolley Barn.

“It’s the kind of camaraderie and companionship and economic development that this effort has helped to spur,” Cooper said. “All of us who are in this room, because you’re business people or local government elected officials or economic developers, you know how many challenges we face in rural North Carolina.”

Cooper spoke during the second day of the N.C. Main Street Conference about declining populations, access to health care, infrastructure and access to internet as challenges small towns face.

“All of us in this room also know the amazing benefits of living in our small towns and in our rural communities — a lower cost of living, mores space for less, a slower pace, friendly people, a great workforce,” he said. “That — to me because I know it personally — represents opportunity.”

Solutions often require an economic investment, and Cooper said he and the North Carolina General Assembly are working toward providing resources.

“We’re working to provide that technical assistance that can help them succeed because small-town life in North Carolina can be very appealing. Instead of fretting over the challenges we face we need to grab the opportunities,” Cooper said. “We have to face the challenges, but we have to emphasize positive aspects of living in small towns across North Carolina.”

Cooper also spoke about an initiative called N.C. Hometown Strong, which “offers a more personal and hands-on approach for state government’s reaction to the needs of North Carolina’s rural communities.” Sixteen of the state’s 80 rural counties are a part of the initiative.

Larissa Harper, executive director of Downtown Salisbury Inc., said she was excited to hear Cooper talk about growing up in a small town and for him to use that knowledge to advocate for communities represented Wednesday.

“He knows what it takes for a small town to thrive and believes that he has some initiatives that will help towns of all sizes and all people throughout North Carolina in many different ways and be fiscally responsible with the budget,” Harper said.

“Creating the synergy of a strong downtown helps rural counties across North Carolina, particularity when they come to events like this and see downtown Salisbury,” he said.

Mayor Al Heggins said years ago Salisbury focused on preserving, not demolishing its downtown historic buildings. Now, the city is known as one that honors and preserves its history.

“Over 10 years, downtown stakeholders and city leaders have worked diligently to approve design features, to have events and make business retention a priority,” Heggins said. “This translates into an overall economic development and strategic program of work.”