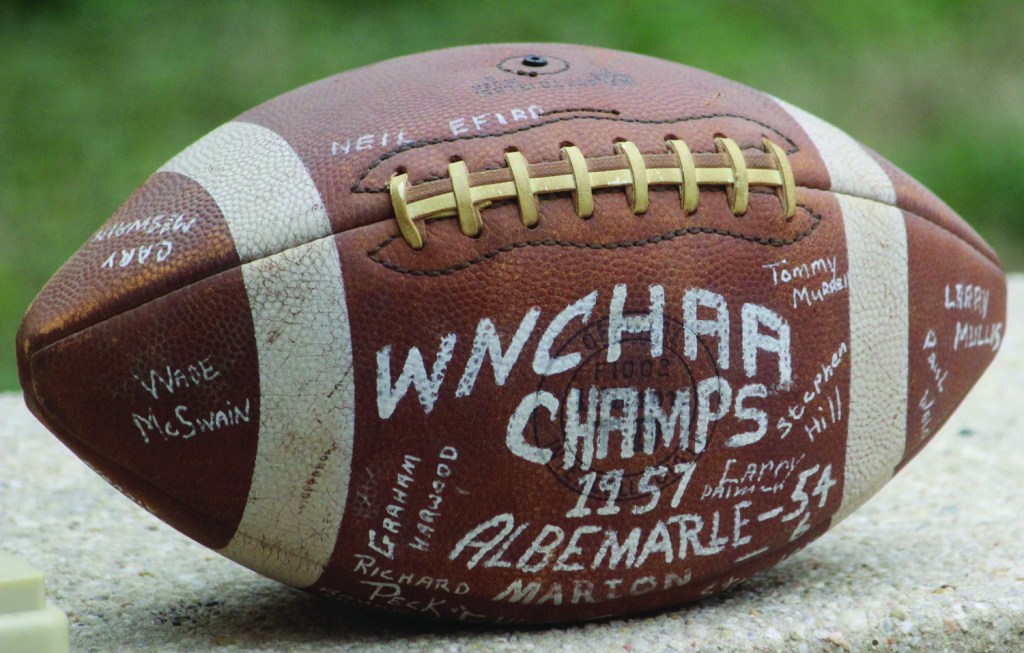 A football signed by the 1957 Albemarle championship team.

Albemarle High School’s football legacy dates back to its glory days of the 1950s.

The architect of the team’s success in the 1950s was a Tarboro native who was a three-sport star for the local high school’s teams. 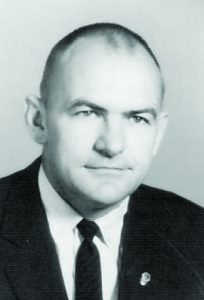 Besides being a leader on the football field, Toby Webb would later become school superintendent.

Toby Webb, one of the two inaugural members of the Stanly County Sports Hall of Fame, graduated from Tarboro High School in 1938; nine years later, Webb began the process of bringing Albemarle Bulldogs football to the forefront of the Western North Carolina High School Activities Association.

The previous coach, M.J. DeLotto, resigned in May 1947; Webb was hired a week later. He had attended and played football at the University of North Carolina at Chapel Hill, graduating in 1943 before serving three years in the Marine Corps, including 18 months active duty in the South Pacific.

His first coaching experience came as a JV coach and varsity scout for the Tar Heels while studying for a master”s degree he earned in 1947.
Albemarle”s first three seasons saw the Bulldogs go 16-13-1 in the South Piedmont Conference, playing teams from larger cities and schools such as Salisbury, Kannapolis, Concord, Asheboro and Lexington.

From that point on, the Bulldogs won 85 of the team’s next 98 games and had five ties. Albemarle’s first post-season game under Webb came in 1950 when the Bulldogs lost in the Jaycee Wash Bowl to Sanford 7-0.

Albemarle did not lose a game in three of Webb’s seasons, including 1951 when the Bulldogs were 8-0-2 including a scoreless tie versus Kannapolis.

The program followed that by going 9-1 a year later, which set the stage for the team’s first state championship.

The WCNHSAA had decided just a few years before to have a postseason bowl game between two of the top teams in the association, but teams were often chosen several weeks before the end of the season. This led to seasons in which two teams would often finish tied as co-champions and not play a deciding final game for the outright championship.

In 1953, Wade Smith joined the Bulldogs as a sophomore.

He remembers his first encounter with Webb, saying he “dwelled in an unapproachable light.”

On the field at the old Albemarle High School with the other players, Smith said he knew he was “tough, capable and could run really fast, but I really didn’t know if that would make a difference.”

The offense Albemarle ran in those days, the single wing, had four players in the backfield, one of whom was the blocking back who called out the signals. At the time, Smith said, he was just a shy “mill hill boy” when Webb asked for an example of how to call out the signals on a certain play.

“I felt a little shy as he said to me, ‘How would you call this out?’ and I laughed. He said, ‘Hell, it ain’t funny.’ And everyone laughed. I was so embarrassed, but that was Coach Webb. He was no-nonsense when he was directing the team.”

The year of 1953 turned into a massively important one for the team, the culmination of the first five years of Webb’s work. After 10 straight wins, Albemarle received an invitation to play in a post-season game at Catawba College against Belmont. Published reports said Albemarle had voted not to play Belmont in the game but several days later had changed that decision. Touchdowns from Donnie Smith and a pass from Otty Lynn to Ralph Setzler lifted the Bulldogs to a 14-6 win and the school’s first football state championship.

“We respected (Webb) so completely and wanted to please him in every way we could. He was a young man in the prime of his coaching career and life,” Smith said.

The win streak for Albemarle continued through 1954 up to a postseason game against Lexington played at Catawba. The Bulldogs lost 19-14 to end the team’s win streak at 29 games.

Albemarle went undefeated in 1955 and won another South Piedmont title, but finished tied for the state title with Valdese.

In the three years Smith was with the Bulldogs, Albemarle had lost only one game in 1954 to Lexington. The bar was set high long before he joined the team, Smith said.

One activity Webb and the team did every summer was to have a kind of “spring training” similar to what happens in Major League Baseball. The team would travel to Cullowhee up in the mountains “where there is nothing to do so you couldn’t get in trouble” and have two-a-day practices, going to bed early each night.

“When we came home, we were in really good shape and ready to play the game,” Smith said.

In 1956, the Bulldogs fought to a 8-0-1 mark through the regular-season, but the game Albemarle tied with Kannapolis forced a playoff game between the two teams for the Southern Division title in the SPC. The Bulldogs dominated in a 39-0 win over Kannapolis, advancing Albemarle to a conference title matchup with Lexington.

However, the Bulldogs lost a late 12-7 lead as Lexington scored late in the fourth to win the SPC crown, 14-12. The loss ended a 21-game win streak for Albemarle.

If one season showed Albemarle’s strength in football those days, it was the state champion team of 1957. The Bulldogs outscored opponents by a combined score of 465-34 and only had two games in which Albemarle won by less a double-digit difference. The Bulldogs won in the playoffs 7-0 over Lexington for the Southern Piedmont Conference title then destroyed Marion 54-6 in Salisbury for the outright state title. 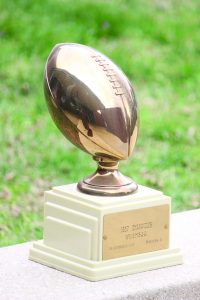 The 1957 championship trophy is a prized possession for Albemarle.

In his final season with the Bulldogs, Webb and the squad went 8-3 overall. Webb posted his 100th career coaching win that season.
Webb spent 11 seasons with the Bulldogs and was 101-21-6 with an 81.25 win percentage. He never had a season with a team under the .500 mark.

When asked about the recipe for the success Webb had, Smith said years later he had spoken to his former head coach as well as one of his assistants, Stanly Sports Hall of Fame member Bear Knotts. While never really finding out specifically from either what the secret formula was, Smith believes it came down to some simple principles.

“We only had a few plays. We kept it extraordinarily simple. We had a couple of plays up the middle, a couple around the end and three or four passes. Then we went over them and over them to create a team of 11 boys moving as one person,” Smith said.

He added the ultimate goal each time Albemarle ran a play was no less then “absolute perfection.”

The prestige Webb garnered from his time as a football coach, principal and superintendent of Albemarle City Schools led the NCHSAA to name the Toby Webb Coach of the Year award. Candidates for the award have to have worked as a head coach for at least 10 years and have made contributions to athletics and the community both inside and outside of one’s coaching duties.

Webb also was an inaugural member of the Stanly County Sports Hall of Fame and was named to the NCHSAA Hall of Fame. He also received the Order of the Long Leaf Pine.

The life lessons Webb created from his time coaching football still stick with the men with whom he worked with through the hot summer practices. At that time, water was discouraged from being used, but one of the team’s managers, Bob Harris, said he used to sneak water to the seniors. 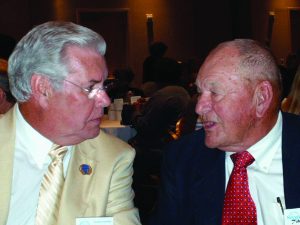 Bob Harris, left, chats with Toby Webb during a reception in 2016. Harris, who went on to be the “Voice of the Blue Devils” for four decades, was a student manager during the Webb era.

Harris, who went on to become the radio voice of Duke football and basketball for 41 seasons, recalled one memory of Webb in practice.

Playing at the Efird Ball Park during the preseason, one offensive lineman, Larry Palmer, was supposed to run one direction down the field, but instead ran the opposite way and collided with a teammate. Harris said Webb blew his whistle, threw down his hat and made Palmer run five laps around the field.

“(The players) watched everything being meted out to someone doing the wrong thing; (they) vowed they were not going to get caught that way,” Harris said.

Smith said he learned much from playing the game, but first and foremost was the idea of the team being greater then the sum of its parts.

“You don’t care who gets the credit. You’re going to handle your particular task as best as you can because you let your teammates down if you don’t. Do you best on every play and don’t brag about it,” Smith said.

Both Harris and Smith agreed a big factor for the success of Albemarle football in the Toby Webb era was the support of the school personnel and the community.

“I’m an Albemarle grad; you’re not going to take that away from me,” Harris said. “That’s the way people looked at it. Even families and people who did not have any connection to the team were Bulldog people. They’d go to all the games; that was their team.”

Smith said community support “drove the team. It would be a shame to think that team did all of that on its own.”

He added growing up when he did in Albemarle was a “great place to live. It was a great thing to be down there in autumn…the town was made for successful education and successful sports.”