From wastebaskets to big-time baskets, Caleb Homesley is living a dream 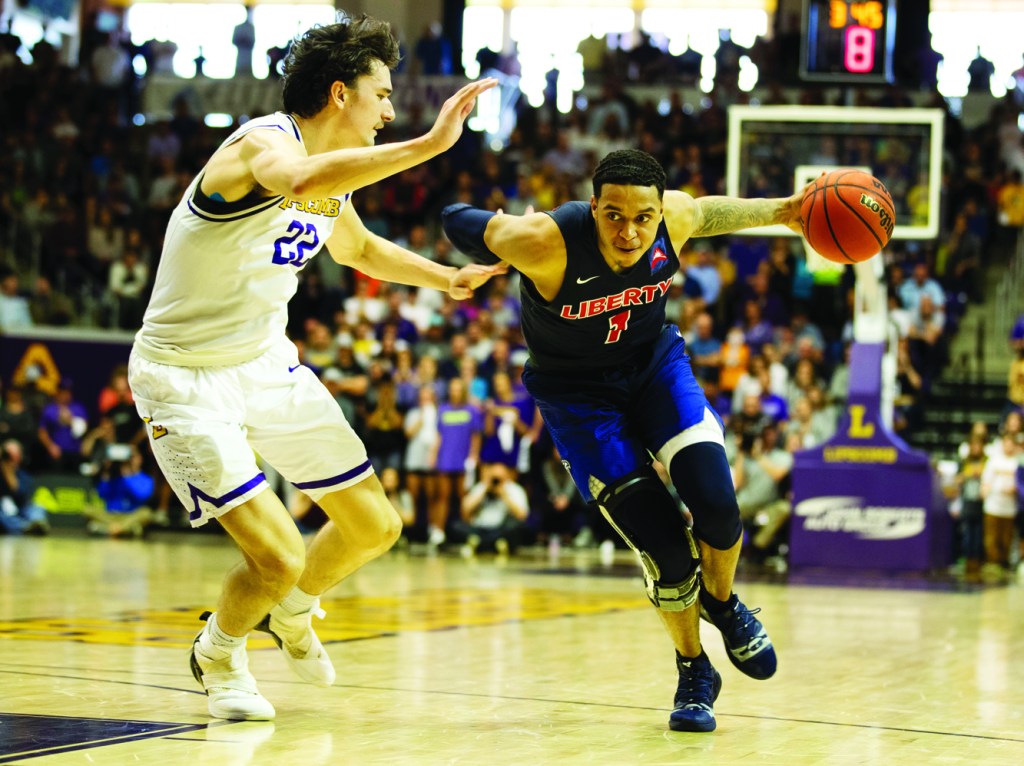 Liberty’s Caleb Homesley looks to drive to the basket during the Flames’ win in the finals of the Atlantic Sun Conference tournament against Lipscomb University in Allen Arena in Nashville, Tennessee March 10. (Photo by Jessie Rogers)

Caleb Homesley could be seen sitting in his grandmother’s classroom at West Stanly High School often as a child, shooting wadded-up papers into a trash can.

In fact, Verla Homesley, the grandmother of the Liberty University guard, said she often had to save papers up just for him to use.

The hours spent shooting baskets at anything he could have paid big dividends for the junior, who helped lead the Flames to the Atlantic Sun Conference men’s basketball tournament championship.

With the win, Liberty earned the ASUN’s automatic berth into this week’s NCAA Div. I men’s basketball tournament.

Verla Homesley, who taught English, journalism and yearbook at West Stanly, formerly owned the Western Sizzlin’ Steakhouse restuarant. on U.S. Highway 52. Caleb’s parents, Jennifer and Darren, both worked in the restaurant as well.

Verla said she remembers everything was basketball for Caleb from an early age, whether it was a Nerf net on a desk drawer or a Fisher-Price basket elsewhere.

One of the first phrases Caleb’s grandmother said she remembers was when anytime anyone came into the room while he was shooting baskets.

His college team of choice growing up where he would go see college basketball was Davidson. Later on, Verla said, he was one of the youngest kids allowed to become a ball boy for the Wildcats.

She tells the story of one time when Caleb went with his folks to an event to meet the players for Davidson.

One player asked if Caleb wanted him to lift him up so he could shoot at the basket.

“He looked at him with a little bit of disdain, turned around, shot the ball and it went in the net,” Verla said.

Homesley was one of three players averaging in double figures in a balanced attack for the Flames (28-6). The 6-foot, 6-inch guard has averaged 12 points per game having started 25 of 34 games this season for Liberty.

A high school standout at Porter Ridge, Homesley had to battle adversity twice in his career, suffering knee injuries which both required surgery.

One came in his senior year in high school while the other was two seasons ago at Liberty.

Growing up, he said he remembers he “always had that passion for basketball.” Caleb said he often as a child would get picked up from school and head to his grandmother’s classroom where he and his sister would shoot wads of paper into a wastebasket Sometimes when the gym at West was open, he’d shoot baskets as well.

“Every day, I’d find a little way to play,” Caleb said, adding he appreciated the support of all his family, including Verla who has put a lot of miles on the road driving to Lynchburg to see her grandson play.

“I knew my family always supported me with the decisions I made,” Caleb said, noting his family’s extra support the times when he was hurt.

Caleb added he is looking forward to Sunday’s Selection Show as well as playing in the tournament which is “every basketball player’s dream.”