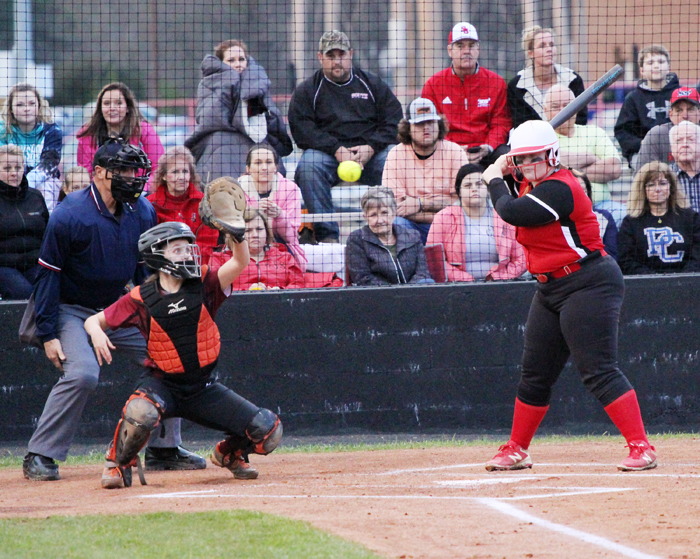 Holly Barrier takes a pitch high in the first inning of Friday’s game against Gray Stone. (Photo by Charles Curcio)

The South Stanly softball team continued its strong start to the 2019 season on Friday night with a 5-0 Yadkin Valley Conference win over the Gray Stone Knights. 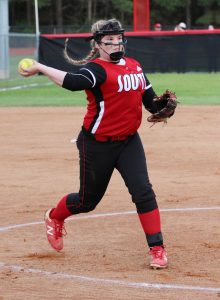 Sadie Lee struck out nine in the win. (Photo by Charles Curcio)

Sophomore pitcher Sadie Lee posted a solid performance on the mound for South (6-0, 6-0 YVC) in tossing a complete-game shutout for the Bulls. Lee struck out nine with no walks scattering six hits by the Knights (0-5, 0-5).

Kylie Crump took the loss for Gray Stone allowing five earned runs on 10 hits with one walk and one strikeout.

South played as the visiting team in the game because the venue was moved from Pfeiffer University to Norwood.

The Bulls quickly gained a two-run lead in the top of the first, all coming with two outs. Lee doubled and her courtesy runner scored when Holly Barrier’s pop fly into right field dropped in front of the Knights’ right fielder.

Barrier later scored on a single by Mattie Hinson, who finished the game going 3-for-4 at the plate. Hinson also added a solo home run in the top of the fourth.

The win for South is the team’s fifth shutout in a row, including a 15-0 shutout of the Knights 24 hours before also on the Bulls’ home field. In the previous five games, South has outscored the opposition 73-0.

South then has a big non-conference test on Thursday; the Bulls host another undefeated team in the county, West Stanly.