Jean Sides James, of Albemarle, passed away on Saturday, March 16, 2019 at the age of 89 at Oakview Park Assisted Living in Greenville, S.C. while under Hospice care.
She was born to the late Zula Irene and Bill Swink Sides, Sr. on April 26, 1930 in Hoke County. 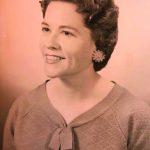 Jean graduated from Albemarle High School in 1948.
She worked at the Agricultural Stabilization and Conservation Services office in Albemarle for 30 years.
After retirement, she cared for children in her home daycare.
She was married to the late Mack Conley James in 1961 and lived together in Albemarle until he passed away in 1968.
Jean is survived by her brother, Jake Sides of Colorado; and her children, Mark Lloyd James of Landis and Deborah James Wattenbarger of Piedmont, S.C. She is also survived by four grandchildren and three great-grandchildren.
Jean was a loving mother that always put her children first. She was a hard worker and provided well for her family as a single parent.
She frequently said that she could not understand parents that took vacations separate from their children; that she took vacations to spend time with hers.
She was a faithful Christian and one of the founding members of East Albemarle Baptist Church, where she served as treasurer, nursery volunteer and children’s Sunday school teacher for many years.
She loved to play cards and would stay late into the night playing with friends at the senior center.
As her health declined, she continued to have a great sense of humor, often making jokes with her doctors and family
Visitation will be 10 a.m. to 12 p.m. Saturday, March 23, 2019 at Hartsell Funeral Home, 522 N. 2nd St., Albemarle, followed by a procession to the grave site at Fairview Memorial Park at 12:30 p.m. for burial and a short family service.
Hartsell Funeral Home of Albemarle is serving the James family.
Online condolences may be made at www.hartsellfuneralhomes.com.