The Rev. David Alexander, formerly of Albemarle, passed away Monday, March 25, 2019 in Chesapeake, Va.
A graveside service will be at 2 p.m. Sunday, March 31, 2019 in Stanly Gardens of Memory with the Rev. David Yoran officiating.
The family will receive friends at Stanly Funeral and Cremation Care of Albemarle from 1 p.m. until 1:45 p.m. prior to the graveside service. 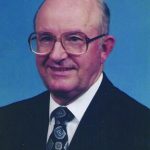 A memorial service to honor his life will be held at a later date.
Born Sept. 25, 1931 in Ballymoney, County Antrim, Northern Ireland, he was the son of the late David Alexander and Annie McAfee Alexander.
Rev. Alexander worked at the Railway Executive Northern Counties Commission from 1948 until 1953. He became a Christian on Sept. 30, 1948 at the Gospel Crusade held in County Antrim, Northern Ireland.
He left for the U.S. in January 1953 with the goal of becoming a pastor.
He was a graduate of Northwestern College, Minneapolis, Minn., and Covenant Theological Seminary in St. Louis Mo. It was there he met and was married to Elaine Hlavin Alexander on May 27, 1960.
Rev. Alexander assisted in the founding of Ballwin Presbyterian Church in Ballwin, Mo.
His first pastorate was at Crestwood Presbyterian Church in Edmonton, Alberta, Canada after which he became pastor of Second Street Presbyterian Church in Albemarle, from 1966-1984.
Upon leaving Albemarle he served as pastor of Mt. Calvary Presbyterian Church in Roebuck, S.C. from 1984-1992, after which he returned to Second Street Church in Albemarle as pastor from 1992-2000.
Rev. Alexander became chaplain of Stanly Regional Medical Center in 2000 and served in that capacity until his retirement in 2011.
During his time as chaplain he also served as interim pastor of Mt. Carmel Presbyterian Church in Ellerbe.
Rev. Alexander served on the Board of Trustees of Covenant College, serving as secretary, and also Covenant Theological Seminary.
Rev. Alexander served as RPCES chairman of the Candidates and Credentials Committee, moderator of the Pacific-Northwest Presbytery 1965-1966, PCA chairman of the Shepherding Committee, was a member of the Examinations Committee and served as moderator of the Presbytery during his time in Albemarle.
He was very active in his community throughout his life. He was coordinator of the chaplains for the Stanly County Ministerial Association for almost 25 years, member of the Stanly County Environmental Affairs Board and a member of the Piedmont Chapter of the National Railroad Historical Society.
His wife, Elaine, passed away in December 2016.
Survivors include his sons Dr. David Alexander of Houston, Texas, and Dr. Brian Alexander and wife, Sandy, of Chesapeake, Va., grandsons Andrew Alexander and wife Sam, Christopher Alexander, and Mark Alexander; and great-granddaughter Adelynn Alaxander.