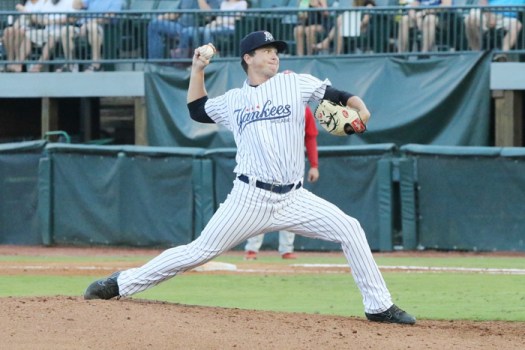 Bryan Blanton fires a pitch during his time last season with the Pulaski Yankees. (Contributed) 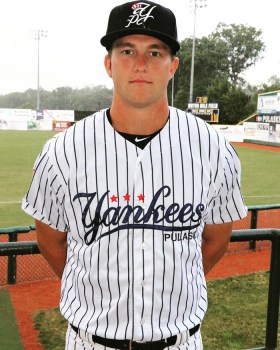 Bryan Blanton will spend time in extended spring training this season as a member of the New York Yankees organization. (Contributed) 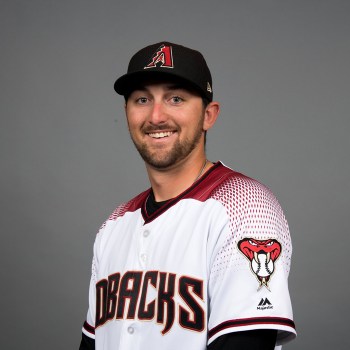 Two former baseball standouts who were opponents in high school and teammates in college are continuing their professional baseball careers as the 2019 minor league season opens this week after Major League Baseball started its scheduled on Thursday.

Zach Almond (North Stanly) and Bryan Blanton (Albemarle), who played together at Catawba and were both drafted in 2017, completed seasons in rookie ball last season. Almond will be moving up to Class-A Ball while Blanton will continue his time in Tampa in extended spring training.

Almond just recently received his new assignment, moving to the Kane County Cougars of the Midwest League, a full-season Class A league with teams from as far east as Kentucky and Ohio and as far West as Illinois. Kane County is located in Geneva, Illinois, a western suburb of Chicago.

The former North Stanly Comet and Catawba Indian was drafted in 2017 by the Arizona Diamondbacks. After some injury trouble that season, his career blossomed last season with the Missoula Ospreys of the rookie level Pioneer League.

Almond played 56 games last season with the Ospreys, earning All-Star honors for the league. He hit .345 fifth overall in the league, with 79 hits in 229 at-bats, including a .594 slugging percentage. Almond hit 18 doubles and 13 home runs (second in the league) driving in 53 runs. His offensive numbers placed him as the best-hitting catcher in the league.

He also ended the season moving up from the Ospreys to the Class-A Short Season Hillsboro Hops in Oregon for the team’s postseason run.

Almond said in the offseason he has been working on “fine tuning” what he does at the plate while “continuing to work and develop my game behind the plate.”

The former Comet also added he hopes the organization has big expectations for him but he is “not worrying about that part. I just have to do what I can do and go out and have fun because at the end of the day it’s still a game. I want to have fun doing it so hopefully I can have another great season.”
Almond said the best part of his pro career so far as been learning “new things about the game I didn’t kno in college or high school.”

The value of having former big-league ball players as coaches has also helped, he added. Before last season, he worked extensively in Arizona with former major leaguer Jonny Gomes.

“Last year was an awesome season for me but it helped out that I had an amazing coaching staff and I was able to get really close to my pitching coach, which helps me out defensively. He can talk about situations and how to handle them from a pitching standpoint,” Almond said.

“I’m continuing to be grateful for this opportunity.”

Blanton transformed his pitching arm from a starter in high school to the closer for the Indians in college. His senior season, he has 14 of Catawba’s 17 saves pitched, coming just one save shy of the season and career records for the Indians.

His fastball at that time was clocked in the low 90s, which attrackted the attention of the New York Yankees. The Bronx Bombers drafted him in the 21st round and he played in 2017 with the team’s Gulf Coast League team. In 16 games, he was 1-1 with a 0.56 earned-run average earning fives saves in five opportunities.

He moved up to the Pulaski Yankees of the Appalachian League at the end of 2017 and spent the next season in Pulaski. Blanton pitched in 16 games for Pulaski striking out 25 with 10 walks in 22 innings pitched.

This spring, Blanton was playing in Florida getting ready for the season by participating in a velocity enhancement program. He said a big thing he was also working on was mechanics, including “getting over the front leg better” along with working on his hip rotation.

Blanton will remain in the Yankees’ facility in Tampa in extended spring training, which happens after the major league training camp closes at the end of March. The players who are not assigned to the minor league teams remain at a ball club’s spring training facility through June. Some players at that point go to play for a short-season team like the Class A New York-Penn League where the Yankees have a team.

Strategy-wise, Blanton said, he said he has worked on “making the right pitch selection at the right time. Last year, I think a lot of the time I just threw the wrong pitch which would cause me to give up a hit. This year, pitch selection is definitely something I want to work on.”

His four-pitch arsenal still contains the same array, fastball, curveball, slider and changeup, and he has not added anything new. However, Blanton said he has worked on all four of those to make them better and more consistent, especially the changeup.

“I hope the changeup can play a bigger part in my pitching this year,” Blanton said.